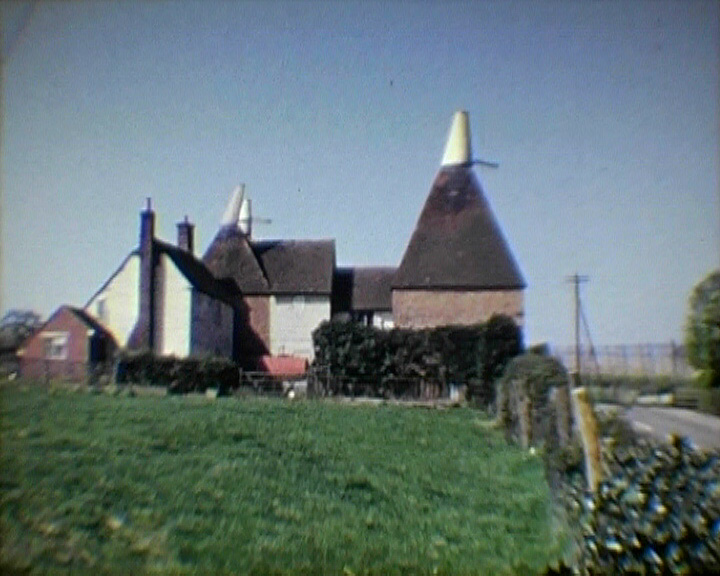 Christmas lights illuminate Ashford (?) town centre and a toddler is filmed with daffodils in a garden. The camera then begins a tour of Kent - static shots and shots filmed from a moving car record quiet, picturesque villages (including Biddenden), Tudor buildings, churches (including the Parish Church of St Leonard's, Hythe), apple blossom orchards, Bedgebury National Pinetum, country lanes, waterways and the coastline. A section of the film is also dedicated to the city of Canterbury - images captured on camera include exterior shots of the Cathedral, and of the modern and old buildings which sit alongside each other in the city centre.

Sporting events taking place in the county include an amateur cricket match, and motorbike and car races on dirt-tracks and a tarmacked racetrack - all are watched by large crowds. The crowds are also attracted to the activities taking place on a rural showground (Kent County Show?). The Carnival Queen is crowned and driven past spectators in an open-top car; a marching band, a troupe of majorettes and a motorcycle display team entertain onlookers before a succession of parachutists expel smoke trails as they fall to the ground; visitors inspect the traction engines, vintage motorbikes and veteran cars being exhibited. Similar scenes are also witnessed at the 1967 Ashford Carnival when a parade comprising of marching bands, majorettes, floats and the Carnival Queen move through the town's streets.

The film-maker also records the various modes of transport available in the county. Passengers travel on the small Hoverlloyd Ltd hovercraft 'Sure' between Calais and Ramsgate - the camera films through the cockpit's window as the windscreen wipers disperse the vessel's wash. Once in Ramsgate Harbour, the camera focuses on the crowded yacht marina. Larger cross-channel vessels belonging to Sealink and Townsend Thoresen are filmed from the high, eastern cliffs vantage-point at Dover. Land reclamation work is ongoing to extend the Eastern Docks. The film-maker adds humour to the images, speeding up the film as a seemingly never-ending stream of cars and caravans board and disembark from the ferries. Elsewhere a large British Rail Seaspeed hovercraft exits the port at high-speed, en route to either Calais or Boulogne. There are also brief shots of one of the miniature trains of The Romney, Hythe & Dymchurch Railway (RH&DR). The film ends with a shot of the setting sun.

The production context for [Scenes of Kent Life. Ashford Carnival Week] (1957 - 1967?) is unknown. The material was however shot on Standard 8mm - a format highly popular with the amateur, home movie film-makers of the era. [Scenes of Kent Life. Ashford Carnival Week] (1957 - 1967?) serves as an interesting amateur record of a range of notable Kent sights, atypical perhaps in it's lack of images of family and friends (except for the brief opening shots of a toddler).

Screen Archive South East houses numerous films which could be considered in relation to this film. For example, Cinque Ports of Britain (ca. 1959) is a contemporary amateur film which explores Canterbury, Dover, Dymchurch, Hythe and Folkestone - it includes a section dedicated to The Romney, Hythe & Dymchurch Railway. [An (Art) Historic Tour Through Sussex and Kent] (1940s) and The Making of Kent (1976) both tour the county, looking at the historic buildings, picturesque villages and larger settlements. As a publicity film Ramsgate. A Picture to Remember (ca. 1971) presents its images of the seaside resort in a different way to those seen in [Scenes of Kent Life. Ashford Carnival Week] (1957 - 1967?) - it does however include shots of the Hoverlloyd Ltd hovercraft 'Sure'. An amateur film-maker captures the crowning of the Carnival Queen and the events of a baby show in The Ashford Carnival and Shopping Weeks (1949) and The Kent Show (July 1974) provides an extensive amateur record of The Kent County Show.

This website provides information about the origins and history of the Confederation of the Cinque Ports.
http://www.cinqueports.org/