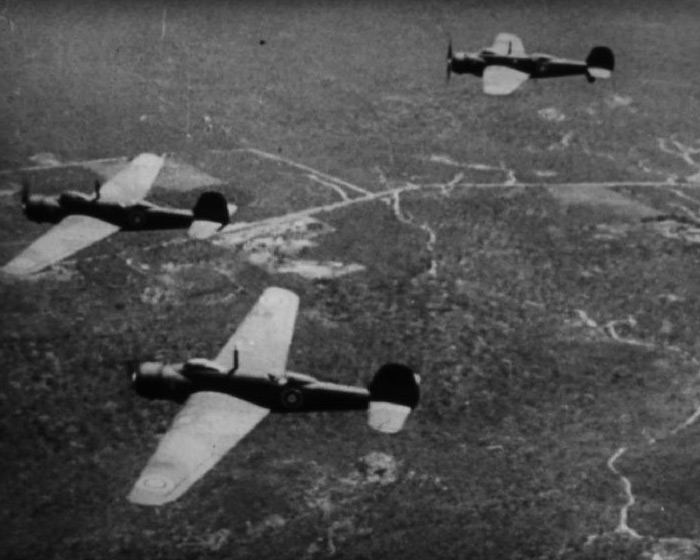 Several aircraft take off from a runway in convoy. Three aircraft fly in formation above the cloud 'L2638', 'L2639', 'L2680' followed by aerial shots of groups and individual aircraft, in close up from various angles. The next scenes show coastal land below as the aircraft fly over head - ground scenes indicate the location the craft have flown over that include a man with a Camel, and an aerial shot of several large storage containers (for crude oil or gas) flank a coastline. Three aircraft land on an airfield (?). A group air crew stand next to a Vickers Wellesley aircraft and three men in suits view the cockpit by standing on a wing. An RAF pilot then signs autographs for a group gathered on the airfield.

Aerial shots show three aircraft in flight over land and a river, then coming into land on air airfield. Crowds have gathered at the airfield. Upon landing a pilot puts a small RAF standard/ flag on the nose of his Wellesley from the cockpit before leaving his aircraft (9 squadron emblem of a bat can be seen on the nose of the aircraft). The shot pans along a line of RAF officers in full RAF dress uniform standing on a flight of steps outside a building.

Outside on an airfield several pilots gather in flight suits from No. 9 Squadron at RAF Honnington, Suffolk (?) (Bat ensign on side of aircraft). Two Vickers Wellington aircraft then leave the airfield 'ZB-KA' and '[E?]F-KA', followed by 'A-KA', 'L4215' also seen in close up, followed by three others in formation seen from the ground flying over the air-base hangers ('L-KA', 'E-KA' and another?).

A close up shows a Spitfire ('K9787') on an airfield with propellor in motion and a close up of the pilot sat in cockpit to then take off on the runway. In flight, the Spitfire barrel-rolls captured by a camera on another aircraft.

The title is followed by an aerial shot of a Spitfire ('K9787') undertaking aerobatic movements.

On an airfield several crews rush to board a Spitfire aircraft, with close ups of pilots boarding into cockpits. Spitfire aircraft 'WZ-D', 'WZ-H' from 19 Squadron take off with a group of aircraft across the runway, to fly in formation. On another airfield 'DL-L', (54 Squadron?) aircraft line up on the runway and take off. Various shots show the squadron in full uniform lined up on the airfield in front of several aircraft. The camera pans down the line. End title: 'Vickers-Armstrongs Ltd. 'The End'.