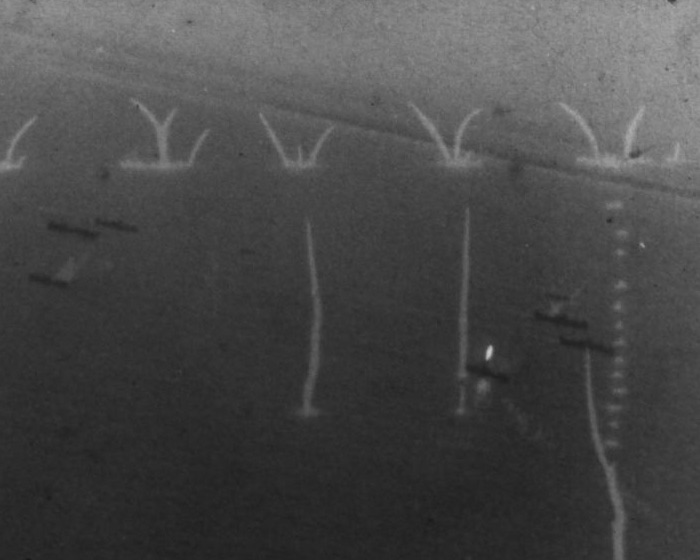 Film 1: 'Coastal Command Operational Film No. C8 - Attack by Beaufighters on enemy convoy off the Frisian Islands 6.7.44; A/C Boston F.P.U Pilot: F/O Gillman Cam.No1 SGT. Heath Cam.No.2 W/O Macnaughton. Time: 2115 Height 500FT' The sequence opens with Beaufighter aircraft gathered on a runway making ready for takeoff (marked 2R in RAAF 455 squadron colours). Several other Beaufighters take off in convoy across the airfield and runway (K2 in RAAF 455 squadron colours) followed by sots of three Beaufghters in formation taken from the ground (?) and the air. Aerial shots of 'IG' and 'IV' seen in the air from another aircraft, are followed by shots of six aircraft flying above the cloud and then very low over the water; joined by a very large squadron of 13+ other aircraft from the RAAF. Enemy ships (German ?) emerge on the water below under attack from the RAAF squadron. The ships fire back, with white gun flashes. The water is peppered with gun fire and mortar splashes. The aircraft get very close to the water (film is damaged) a Beaufighter emerges from the gunfight heavily damaged with the bottom of the fuselage on fire (below the cockpit), forcing the aircraft to ditch in the sea with the pilot ejecting from the aircraft.

This is a 16mm cop-print of the 35mm print held by the Imperial War Museum, London. OPC 8 'According to the reports included with the dopesheets for this attack, three German merchant vessels were sunk along with two escort vessels. (Source: IWM)