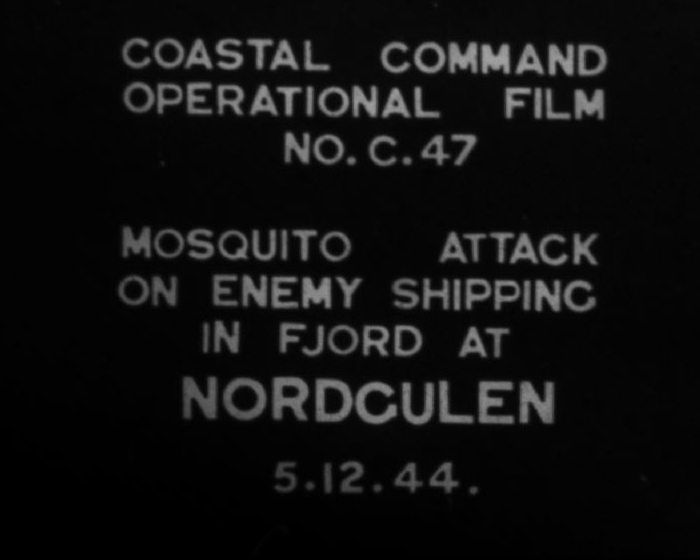 This compilation of black and white film highlights several operations undertaken between 1944-45 by RAF Coastal Command against enemy shipping in the waters around Norway.

The first film opens with an intertitle: 'A/C Mosquito F.P.U. Pilot: S/Leader Turner; Cam & Nav: Sct. Hearne; Height: 1,500FT.; Time 1315-1405 HRS. Squadrons on Operation Nos. 248; 235; 143' This black and white film documents the air attack on shipping at Nordgulen, Norway. RAF aircraft are seen leaving the airfield and flying over land and sea. The action is recorded from on board another aircraft. Close ups of aircraft are seen as the planes fly in formation - (LR363). The aircraft fly over Norway, taking fire from gun ships in the sea below. Several aircraft return fire flying over land and then return to the bay to take their shots.

The second film with intertitle: 'Squadron No. 455 A/C Beaufighter F; Pilot & Camera: F/LT. Proctor. Height: 1,000-100FT. Time: 1440HRS.' documents the attack on enemy shipping off Aalesund, Norway by RAF Coastal Command in 1945. An aircraft flies towards a ship at sea attacking it with gun fire. The ship retaliates and returns fire. The plane banks sharply to the right and flies over land.

The third film with intertitle: 'Squadron No. 455 A/C Beaufighter F; Pilot: F/O Herbert. Height 1,500FT. Time: 1615HRS.' documents the air attack on enemy shipping at Ford, Fjord - Norway by RAF Coastal Command in February 1945 by squadron no. 455. Aircraft fire at two ships in a bay as they fly over a snow covered mountain landscape. The aircraft with the camera flies closer to get a better shot and to fire on the vessel at sea in close up.

The fourth film with intertitle: 'Camera Aircraft F.P.U Mosquito D.Z. 592; Pilot: F/LT. W.M.O Jones; Cam. & Nav. F/O. Newell: Height: 1,000FT. Time: 1310 HRS' documents the air attack on shipping in Skagerrak, Norway by RAF Coastal Command in March 1945, by Mosquito D.Z. 592. - Squadron No. 143, 248, 235 & 333. Aircraft fly in formation above the cloud, to then fire on a fleet of ships at sea. Shots move between the aircraft firing on ships and the planes circling over the sea. Gun and mortar fire bounces off the sea, with the film-maker's aircraft coming in low over a ship that is returning fire. The aircraft circles for another attempt firing on another ship at sea. They leave two barges to sink and five on fire.

The fifth film with intertitle: 'Squadron No. 144 A/C Beaufighter R: Pilot F/LT. Power; Camera Fixed; Height 1,500FT.: Time: 1635HRS' documents the air attack on enemy shipping in Vindspol, Norway in March 1945 by RAF Coastal Command and Squadron no. 144. The aircraft flies over a snowy landscape towards a bay or sea, taking heavy fire from a ship very close to the shoreline. The aircraft fires back.

The sixth film with intertitle: 'Squadron No. 143 A/C Mosquito T.: Pilot: P/O. Mansfield; Nav. & Cam: F/O Fox; Time: 1722HRS' documents the air attack on enemy shipping at Tejgenaes, S.W. of Nerlandsly in March 1945. The aircraft fires on a ship at sea, (passing over an island populated by houses on a causeway). The ship fires back. The film ends mid shot.

This is a 16mm copy-print of the 35mm print held by the Imperial War Museum, London.

Film 3: This day was known as 'Black Friday' in the Squadron after this day, as six Beaufighters were shot down with the loss of all but one of the twelve crew. (Source: IWM)