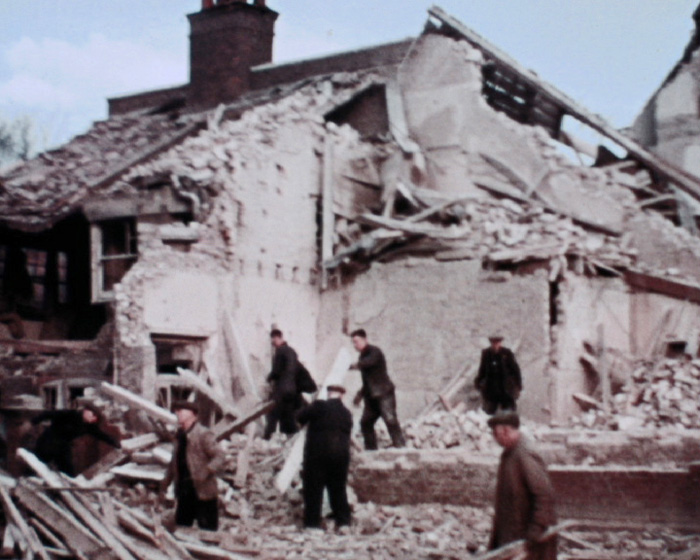 The film starts with aircraft trails in the sky from an aerial battle, followed by scenes of bomb damaged houses and teams of men searching and clearing rubble from one area. Further bomb damage scenes show houses destroyed and windows that have been blown out. Search and rescue scenes amongst the rubble are shown with men wearing helmets, some marked ARP and DW. At a control room, a woman works behind a screen marked with holes and men are seen wearing 'civil defence' badges on their uniforms.

At a converted shop a sign on the window reads 'A.R.P Controller, Liason Officer, Enquiries'. Men wearing various armbands walk in an out of the building while the public walk by. Indoor shots show a room filled with furniture, tin cans and other items of what may be donated supplies for those afflicted by bombing, or rescued effects from bombed houses. Further shots show men digging in rubble and several houses destroyed by bombing. Ambulances are shown being despatched and an incendiary device is tackled, possibly in a training exercise (?). After an intertitle reading 'On Watch', a warden surveys the Brighton skyline from a roof top. Further bomb damage scenes are followed by scenes at a control room with men wearing headsets while others place pins on a map of the Sussex coast. Further scenes show women standing by salvaged possessions and destroyed houses. A pan across the Brighton skyline is followed by a men playing an informal game of football.