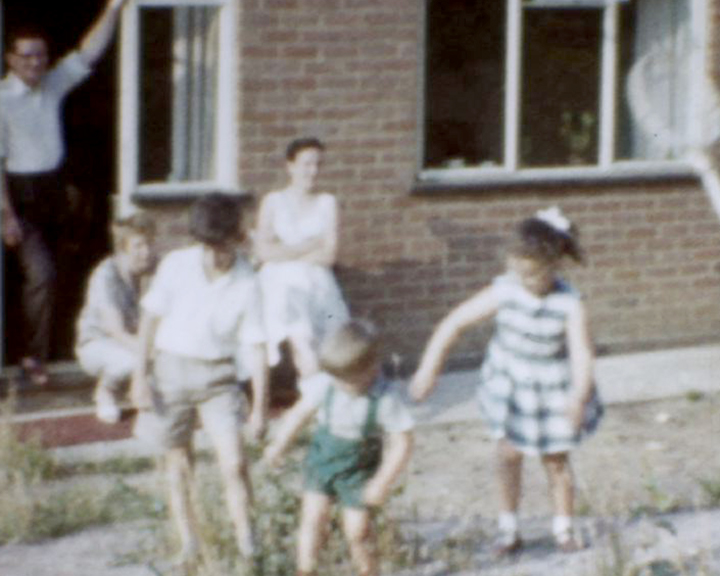 This colour film shows a woman playing with a baby sat in a plastic bath of water in the garden, followed by shots of the family socialising and playing games together and portrait shots of a woman wandering around the garden in a short dress-style bathing costume.

The next sequence shows a woman building a brick wall at the family home and constructing a wooden frame for her new lean-to greenhouse. Mixed shots also show the garage or workshop space with building supplies and close-ups of the woman finishing the frame in the rear garden. The sequence closes with shots of the finished frame attached to the house. A longer sequence then follows, showing the family socialising together in the family garden, followed by shots of the family at an airport (Shoreham?) with several planes taking off from the runway, closing with shots of the interior of the terminal building.

The next scene shows several children and a family group playing outside a purpose built block of flats, a young girl plays with her toy pram and dolls in the garden and climbs up the frame of a swing.

The film then cuts to scenes of a woman walking across a lock bridge (Thames at Laleham?), brief shots of the family on a picnic and attempting to rescue a car from the shingle on a beach; closing with shots of a group beach picnic.

The final scene shows panoramic exterior views of a tower block with a green Southdown bus passing in front, followed by views of a Bowling Green with a game in progress and dark shots of a campsite (?).