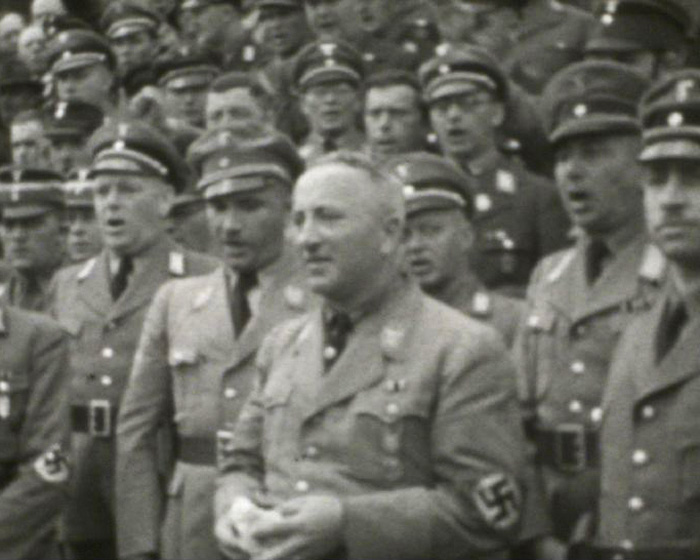 The black and white film opens with a shot of a racecourse from the stand where Nazi officers and men gather. Close ups follow of the race trophies and a photograph of Adolf Hitler on a prize giving table. A band plays, horses are led into a paddock and several officers in uniform watch the events and talk amongst themselves. Officers gather around Franz von Papen (?) as he awards a trophy. Papen stands talking to two ranked officers, one wearing an Iron cross and Maltese style cross pendant as a necktie. The next sequence features a man in a suit standing on an airfield, followed by shots of a man putting on a flight suit next to a German bi-plane (D-2984 - Focke-Wulf FW44 D owned by the Deutsche Luftsport-Verband (DLV) - the German Air Sports Association) surrounded by other men in civilian clothing. Several men huddle together in flight suits talking to a man with a clipboard.

The next section shows several officers in a car driving in convoy to the Nürburgring motorsports complex (south of Cologne), arriving and watching a race from the stand.

The next section with KODAK title opens on an airfield, as several men disembark on to the runway from a JU-52 aircraft named 'Wilhelm Cuno', the shot cuts to a busy street lined with officers saluting a senior Nazi officer walking towards the camera flanked by other officers. The next shot shows a larger gathering of uniformed men walking down a flight of steps outside a church or municipal building to into a car. The film then cuts to a horse show jumping event with several officers sitting in the stand behind the silver cup on a podium in front. A group of men are seen at a riffle shooting competition and filling in competition forms. They are surrounded by a group of people watching the event.

The AGFA title dated 1936 shows another show jumping competition where several riders are dressed in Nazi military uniforms. Youth groups board coaches that line the side of the road and a brass band plays for the waiting groups. A banner draped on the side of one of the buses suggests it is related to the Bund Deutscher Mädel (the League of German Girls) and the Hitlerjugend (Hitler Youth) from the Rhine region of Dusseldorf (?). The film continues with shots of the interior of a railway station concourse and platform, as a steam train arrives marked 'Kraft Durch Freude' (Strength Through Joy). A large group of people are next seen walking next to a river (or lake) led by a brass band.

The final section of the film is shaky and not aligned correctly. It shows a group of men and young boys in civilian clothing attempting to fly a glider. Several senior officers surround them on the open field. The boys are then called to parade in their barracks.

Deutsche Luftsport-Verband (DLV) Franz Von Papen was the Vice Chancellor of Germany from 1933-34.