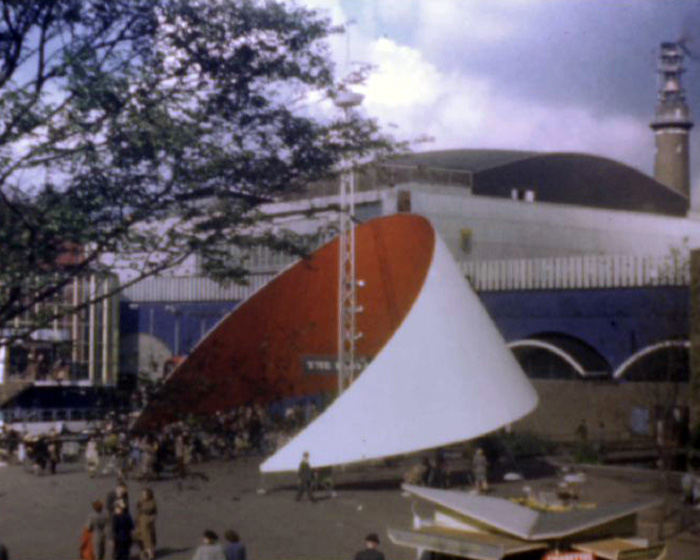 This colour film provides highlights of the 1951 Festival of Britain, South Bank Exhibition, held at Waterloo in London. The scenes include many of the exhibition buildings such as the 'Royal Festival Hall', 'Dome of Discovery', 'Power and Production', 'Sea and Ships' and 'People of Britain' buildings.

The buildings and halls are surrounded by contemporary sculpture and art displays including the 'Skylon' and 'Abacus Screen' with bandstand and the Festival Pier. The film features mixed close-up shots of stone and bronze statues at the festival including 'The Islanders' by Siegfried Charoux and Henry Moore’s 'Reclining Figure'.

Interior shots of 'The Lion and The Unicorn' building highlight a statue of a man on a unicorn in the base of a stairwell, followed by a hall filled with art and decorative exhibits (out of focus).

Shots of the exhibition are mixed with general panoramas of the exhibition's urban environment, with people walking next to the river; a brief scene of a team playing wheelchair basketball; steam locomotives passing over the nearby railway bridges; views of the River Thames and Houses of Parliament; views across to the North Bank of the Thames and Waterloo Bridge.