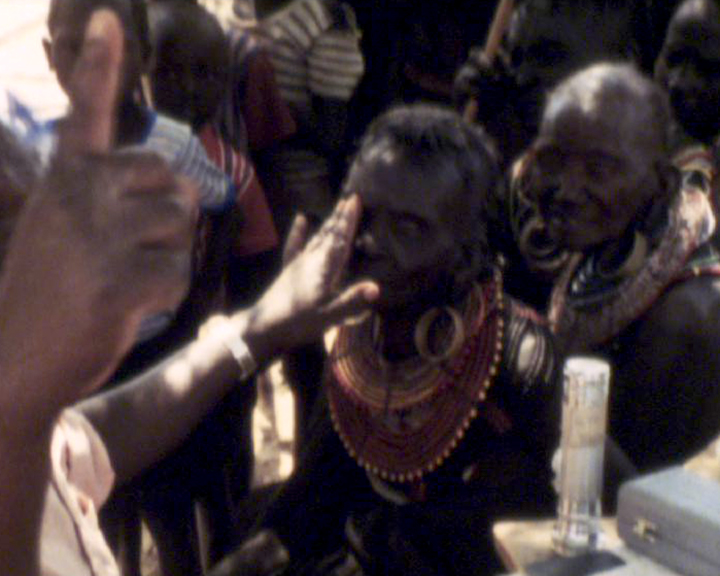 This programme is presented by Michael Buerk from outside the Moorfields Eye Hospital in London and from a specialist unit in Tanzania. The film explores the work by the International Centre for Eye Health at Tanga Hospital, Tanzania and treating a blind community of Pokot people. Simon Ketenga (?) explains the extent blindness and Trachoma effects the Pokot people and the impact this has on their lives. Michael Buerk visits a Pokot family in Tanzania, where almost all of the family have Trachoma or are blind and a training centre that teaches and trains eye healthcare specialists. Dr John Bisley explains to Micheal Buerk, how the first eye care centres were created in the 1950s and the level of blindness among the populations in Nariobi at that time. Dr Bisley shows several photographs to the camera of the teams early work. The film takes a journey with a grandmother from the Pokot people, who agrees to visit a district hospital to have eye surgery to remove cataracts (with scenes of surgery). Following the surgery, she is able to see her family for the first time in three years, thanks to the work of Sightsavers. The film ends with Michael Buerk requesting donations or support for the charity and Simon Ketenga thanks all those that have already donated or supported the charities work.

The film has opening titles and an end Sightsavers slate. The film contains some scenes of adults and children being examined and scenes of surgical eye procedures. The scenes featuring the Pokot peoples and the Blue Peter mobile eye unit Land Rover also appear in AID 9249 - Sight Savers in Africa.