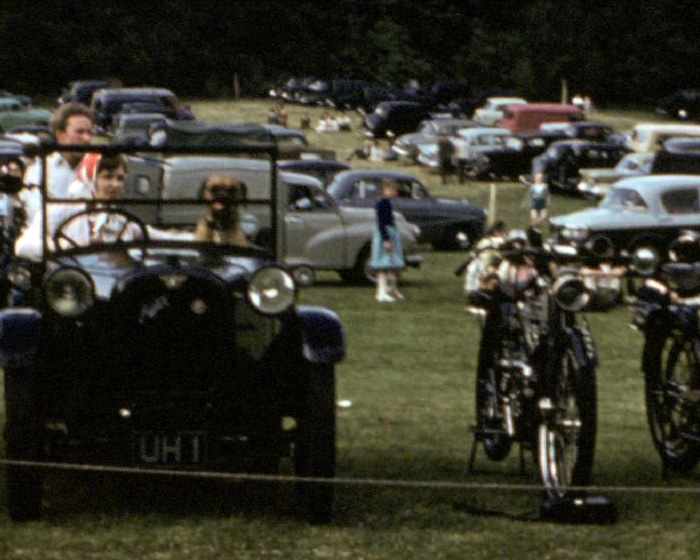 The main title is followed by an Intertitle: "Topsy Turvy World" and "Brighton Run", with shots of cars and motorcycles leaving Horley and going up a hill on a residential street. This is followed by an Intertitle: 'Springtime'. with shots of their Sunnymede house and garden with Daffodils swaying in a breeze and the lawn made ready for a game of Croquet.

In this section, several adults are seen standing around a Victorian or Edwardian pram in the Sunnymede garden. The group show it to the camera for close-ups. On: 'Whit-Monday' the Giles family attend a vintage vehicle display in a Bentley car (?), with registration plate 'UH 1' and two motorcycles - a Triumph and a Douglas, at Brooklands, Surrey.

The family home 'Sunnymede' and its garden in Chobham is shown with an intertitle, followed by a montage of shots of with red and yellow roses in full bloom

The next section shows the Giles family on holiday around the UK and competing in vintage vehicle events. The first part opens with shots of an airfield or display field for the Vintage Motorcycle Banbury Run in Oxfordshire. The final shots are of a caravan being towed by a car in a field and through through a village (Shipton-Upon-Stour, Warwickshire?).

This part features sweeping rural shots of the River Wye and the rural hilly landscape followed by shots of the family caravan with car, parked in a field next to the river.

The film opens with the family leaning out of a window over a village high street, watching a parade. A marching military band of bag pipers (?) pass below, closely followed by a large group of children and adults in fancy dress. Several vehicles follow the crowd, adorned with flowers, each carries a carnival queen dressed in a white dress with attending girls. A banner on each of the vehicles reads: 'Queen of the Spa 1960', 'Forest Queen' and ''Buith Wells Carnival Queen'. Further hand pipers and marching bands pass through, accompanying a float with the 'Black and White Minstrel Show' and a banner that reads 'TV award of the Year'. The last vehicle to pass is a vintage car.

The next section, with intertitles, features several family members with new born babies at the family's Chobham home and in the garden. The film then returns to the caravanning holiday in Eype, with coastal shots of the landscape down to the sea with rural farmland.

There are scenes of cows in a field and in a farmyard surrounded by industrial buildings. This is followed by shots of a mixture of black and white animals from the farm - a herd of cows, a black and white cat, black and white sheepdog with two pups suckling and two more black and white cats. The last shot of the sequence shows a cow in a pen (dark shot) and a man with a blue tractor towing the caravan out across the fields.

The final sections return to the Surrey home. The family are gathered on the patio outside the house. A woman holds a baby in a white christening gown, whilst the adults are dressed in formal clothing.

Wintery scenes show the house and garden with the new lampposts covered in a think layer of snow. The film ends with an animated closing title:'Sunnymede 1961'.