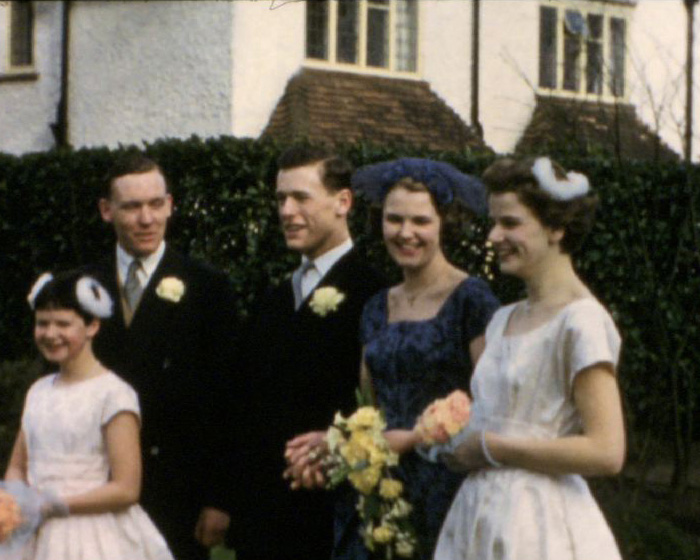 The film opens with a coloured still title shot of the family home. This is followed by scenes at a church wedding in Surrey (?). The bride (dressed in blue) and groom stand outside the church flanked by church clergy. Mixed shots of the wedding party show them standing in a garden with the photographer taking the wedding photographs.

The next sequence follows the family on holiday to West Bay, Dorset, where a metal Automobile Association (AA) road sign indicates they are in West Bay. This is followed by shots of the West Bay Hotel, the village with harbour views, and a fishing vessel on the shoreline. The holiday film continues with shots of a rural forested area, follow by views of a flowering garden (?), returning to the beach, cliff and shoreline of West Bay. On the beach a group of workers are seen shovelling shingle into the back of the horse drawn carts who then haul the shingle back up the beach to other workers, who then transfer and sort the shingle via tractor and conveyor into the back of a truck.

The next scenes show Mr Giles installing new French doors and windows at the family home 'Sunnymede' in Chobham. The old windows are in a pile in the garden and he is seen rendering the brickwork around the new doors.

The next section opens with coastal panorama shots of the Eype valley and landscape. A close-up of a sign reads: Howes Eype and Down House Lanes no through road'. Then next sequence shows the caravan site next to a rural farm, including shots of a tractor cutting grass, ready for bailing and a working water wheel on the outside of an industrial mill (possibly at Upwey, Dorset ?). The film briefly returns to holiday footage of West Bay Harbour and sea front, where two children play on the shingle beach throwing stones into the sea. The next sequence shows rural farm workers forking hay onto a moving conveyor, whilst a tractor, gathers and pushes a new pile of cut straw towards them. Farm workers pile and trim the wheat straw stacks into large bails (?) capped off with a straw roof. Further shots of the West Bay coastline and rural landscape follow, with Mrs Giles standing in a field with a dog and the family driving away from the campsite in their car.