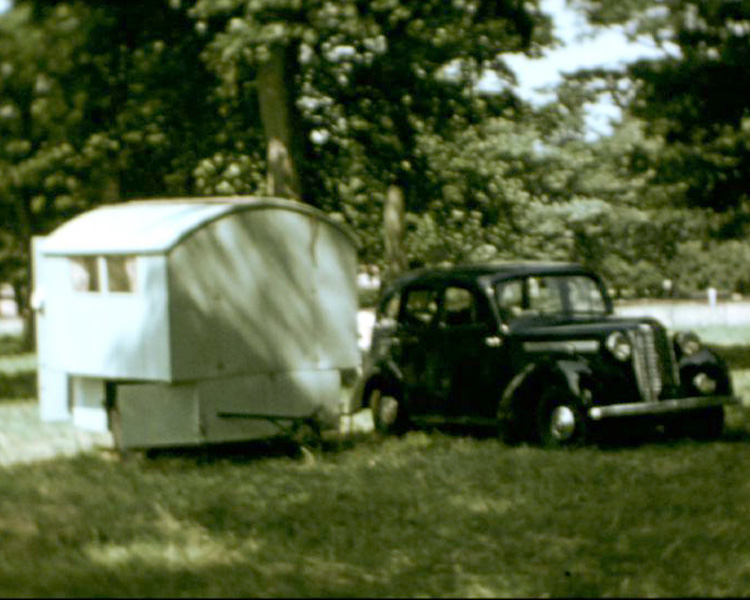 'A Rather Rank Production', The animated titles are followed by shots of wintery snowy scenes of the family house and gardens in Chobham, then a change of season to Spring with a family member sleeping in a deck chair and on a swing lounger in the garden.

After the title [which refers to the nickname for Giles son] the film shows the family watching a group of army cadets on parade, eating together with a young man in uniform at a table (possibly Giles son?) and watching a large group of cadets undertake a Physical Training display in a playing field.

The next sequence opens with the family on a caravanning holiday around the UK. The first is to Bourton-on-the-Water in Gloucestershire, where they visit the low arch bridges over the River Windrush. The next location reveals a men's four's team rowing at Henley, Berkshire being watched by large crowds. A brief visit to a car race at Silverstone Race Track in 1951 follows, with the camera located inside the track. Cars speed past as the shot reveals the watching crowds behind roped off barriers next to the track (towards Hanger Straight?).

In Berkshire, the film shows two men in a row boat with a woman as cox on a river, (dark shots) followed by teams of 6 racing each other in low raft style punts. Coastal shots of Stoke Point, near Netton in Devon open the next part, with the family walking in a rural landscape. This is followed by shots of the same group on a farm holding black and white puppies. A brief visit to Plymouth Harbour with boast and ships on the sea is followed by shots of the seafront and close-ups of Plymouth Royal Corinthian Yacht Club and Tinsel Lido, Devon.

This section opens with snowy scenes of the family garden, followed by daffodils in full bloom. The film-maker visits London to see dignitaries inspect the Guard of Honour at Guildhall and watch the Trooping of the Colour in Horse Guards Parade, attended by HM The Queen, Elizabeth II and the Duke of Gloucester.

The next section shows the family on a caravanning holiday in the UK, first visiting a caravan site at Dunwich and then touring the local area to see the windmill at Horsey. The group then visit West Runton Roman Camp and Beeston Regis, Wells-next-the-Sea and Holkham Hall in Norfolk. The final part of the film shows the family's visit to the Jolly Sailors Inn in Brancaster Straite, Norfolk. The shots of the Caravan and car parked on sites around the UK, are accompanied by panoramas and general landscape views of the local area.