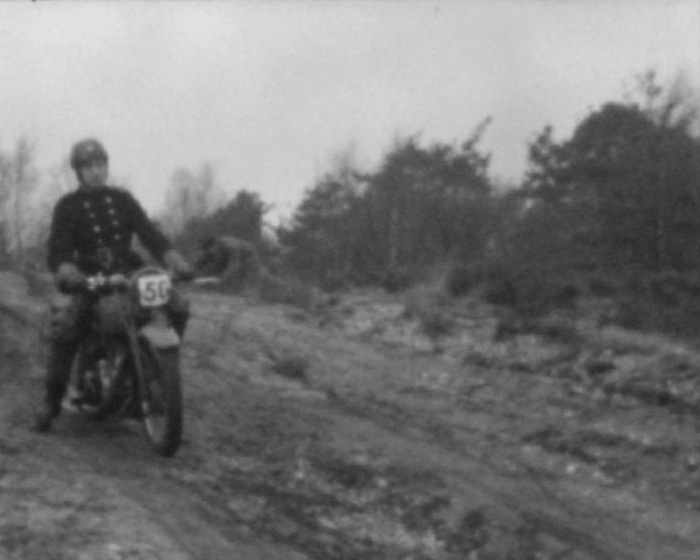 The film opens with a main title: 'Army V N.F.S. Dispatch Riders Training Trial. November 26th . 1944'. The dispatch riders and other officers gather in a field with their bikes before the start of the day's events. A catering van serves food and riders gather with race numbers waiting for the events to begin. Several riders are seen peeling off from the group in race order.

Intertitle: 'Wheel Changing' An NFS officer demonstrates the changing of a wheel on his motorcycle.

Intertitle: 'Rough Surface Ascent. With Alternative Stop, Turn and Decent' - An Army rider is seen attempting to scale the hill on his bike (out of focus), whilst several other riders wait for their turn at the bottom. Other riders are then seen taking turns to undertake the event.

Intertitle: 'Hill Climb. Gully and Loose Surface' - An NFS rider takes his turn to scale a hill, but skids at the top. Several other riders are seen attempting the hill climb.

Intertitle: 'Water and Mud' - NFS and Army riders take turns to cross a muddy pond in one attempt.

Intertitle: 'Deep Water' - The title is followed by riders completing to cross a water filled channel, without stalling the motorbikes.

Intertitle: 'Acceleration and Brake Test' - At speed, riders go up and crest a hill, braking midway down during the decent. The camera follows several men on the decent and brake part of the test. Officers watch from the sideline. 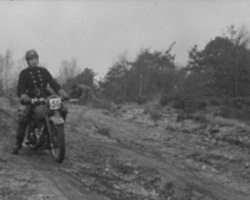