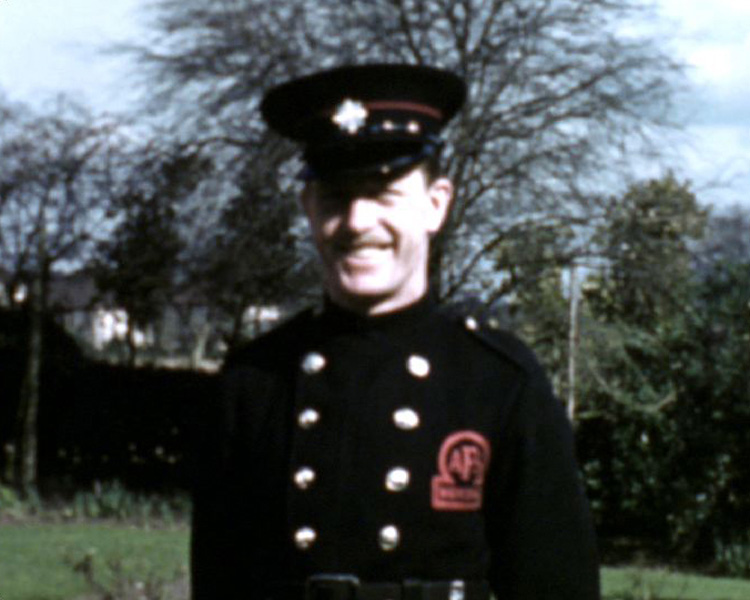 The film opens with the house and gardens covered in thick snow, followed by shots of the White Hart public house in the village of Somerton, Somerset. Mixed shots follow of Somerton village with exterior views of the shops, streets and buildings including St. Michael and All Angels Church just off the main street.

The next part of the film shows Mr Giles in his AFS uniform and standing next to his Bugatti chassis fire engine (Registration: GC8581). This is followed by close ups of two young boys and a wide shot of a young girl playing in a garden with a bicycle. The adults and other children then join the girl in the gardens (?). In the final shot, two boys are playing on a river in a punt.

In this section the family are sitting and playing next to a pond, including Eric Giles' two sons. At their Grandfather's home, 'Sunnymede', in Chobham, there are several portrait shots of the family in the garden. A red setter dog (Roger) is filmed dressed in a hat, tartan scarf and yellow jumper in the garden. The dog looks straight at the camera dressed in outfit. The final film of this section is in black and white and features the Giles family at at home during Christmas. (Very dark and hard to make out action).

This black and white section shows the family at play in the snow in the garden. The family build a snowman and have a snowball fight. The next scene shows the children ice skating and playing hockey on the pond on Sandpit Hall Road, in Chobham. The next part of the film is very dark (long duration of black), with a young boy dressed in pyjamas in bed (?). The shot cuts to further black and white footage of an event where a school mistress hands out sheets of paper (?) to a group of boys. This is followed by colour footage of the sports day event and the boys competing in several races and long jump events. Older boys compete in high jump events and relay races.

The next colour section shows two boys playing with a toy train set in the garden, followed by a group of children playing in a large garden. The final part of the film in black and white shows a boys' school Rugby match on a playing field at Allen House School near Woking, and a young boy riding a pony.