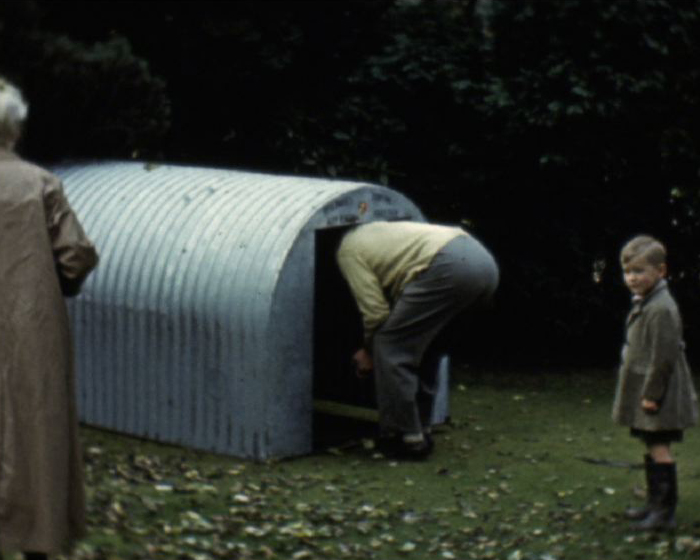 The film opens with shots of a brood of Sussex Bantam hens and a large brood of chicks.

This section shows family members feeding large geese and peacocks that sit on a roof of a building. Several shots of peacocks displaying their tails and being fed follow (these are quite dark and hard to make out).

Scenes show an indoor boxing match. (The shots are too dark to make out the action.)

The next section features a miniature narrow gauge steam railway, where an engine driver sits astride a small engine. In front are several open passenger carriages. The train then tours a track via a wooded rural area, before returning to the station. Several people are seen boarding the ride. The next part of the film is of the family garden at Ottershaw in full bloom whilst a woman sits in a swing lounger reading a paper.

The family are seen sat in a garden swing lounger reading a paper, eating and drinking at their home in Ottershaw.

The section opens with several portrait shots of the family and their pets posing for the camera in their garden. Individual scenes of the children are followed by scenes of the pets including: a tortoise eating grass, a red setter dog, a grey cat and a black and white cat. The last shot is of a woman feeding a large brood of chickens around their feeding bowls.

This section shows long wide shots of a house and garden with flowers in bloom.

This section opens with portrait shots of a young boy dressed in brown school blazer (Wallop School, Weybridge) and white sports kit in the garden. The film documents the sports day event in the playing filed at the boys' school, showing several sporting events including races, a long jump event, a sack race, an all male adult race and a long distance race around the playing filed. The group then enjoy afternoon refreshments in the school grounds before the award ceremony takes place.

This section shows a return trip to the railway, which features miniature steam engines from the SBCR livery (Surrey Border & Camberley Railway). An engine driver has allowed a member of the family to sit in the cab of the train whilst the children sit on the passenger carriages at the back. This film then returns to shots of the garden and house at Ottershaw and a member of the family reading a newspaper from the swing seat lounger in the garden, followed by shots of the garden and two children riding around the garden on a bicycle.

'October and now for some A.R.P'

The final section shows the family starting their wartime Air Raid Precautions. They begin with the installation of a Wilmot's (Anderson) Air Raid Shelter in their garden. A man digs a large trench and with assistance from members of the family. They carry the shelter into the garden over their heads. Final shots show the shelter trench being back filled, a brief view inside the shelter and the steps down being painted.