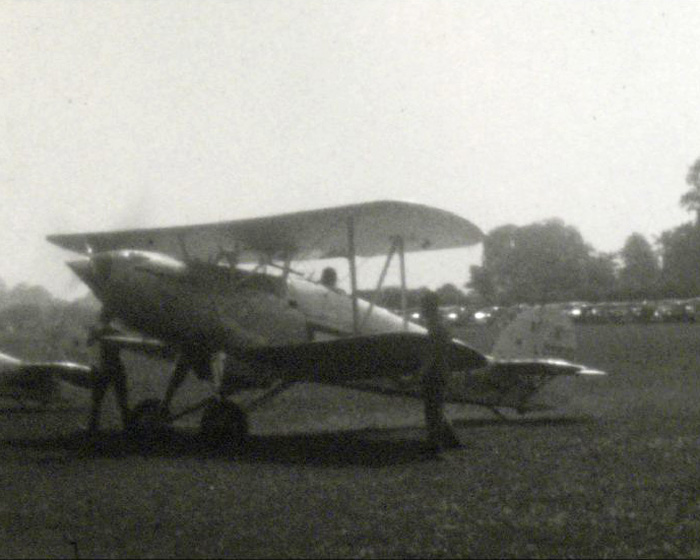 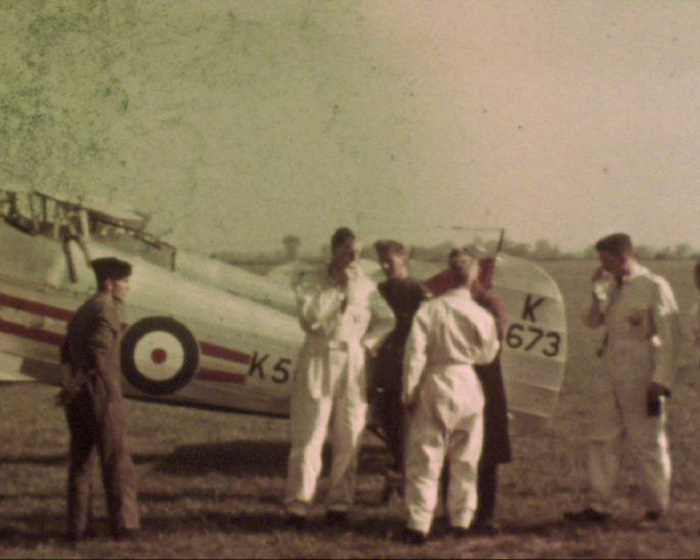 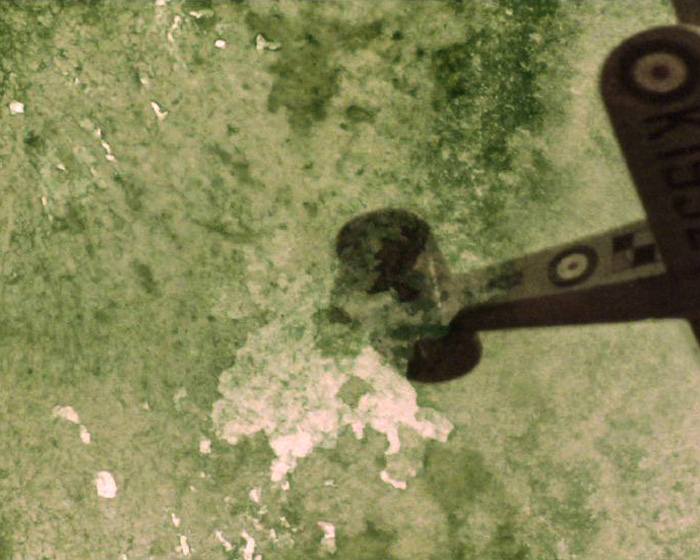 The film includes behind the scenes material of pilots boarding, landing craft and taking off from the air field, as well as of the air display formations and aircraft. The pilots also give autographs to members of the public at the event. Several pilots walk around the airfield in flight suits and helmets, with the hangar buildings behind the crowds watching the air show. Squadron 'F' sign with flag is attached to the side of one of the buildings. A title introduces further air display material 7 minutes 50 seconds into the film.

[Some of the film is heavily damaged from this point and has a green cast to images from K6130 Gloucester Gladiator due to the films colour having deteriorated.]

K6130 Gloster Gladiator I - Pilot seen on the airfield boarding his aircraft wearing his flight suit and helmet with face mask. A member of the ground crew, preparing the aircraft for flight, exits the plane for the pilot to board and take off.

Two Gloster Gladiators are seen paired in flight - K6130 (plus another?) K5673 Hawker Fury I - with 'A' Flight Leaders tail marker on the ground with two flight crew and the pilot later seen exiting the aircraft surrounded by ground crew. The pilot is then joined by two other pilots from other aircraft. K2043 Hawker Fury I - seen in a row on the air field flanked by K5673, K2900, K2901 K1932 Hawker Fury I - in flight (Close up - film is damaged/ green tint) K1930 Hawker Fury I - Squadron Leader 43/F, tail in close up K3731 Isaac Fury II - Squadron leader tail fin - F/Lt. Towsend (?), lands on the airfield to meet the ground crew. The pilot leaves the plane and two women rush over to him for autographs. He is then seen walking across the airfield.

Following the title, nine aircraft (Hawker Fury ?) are seen in horizontal formation, a crucifix formation and together in three groups of three with the left and right flanking groups dividing off to continue the display. Pilots from the three craft are seen on landing. 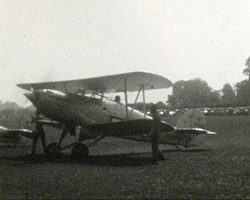 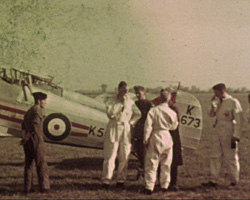 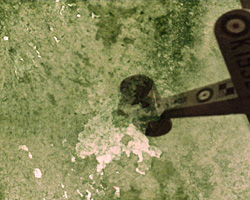 Tangmere Airfield near Chichester was the home of the Royal Air Force between 1917 (formerly Royal Fly Corp.) as a training base and was closed in the mid 1920s. It was later reopened in 1925 and became fully operational in 1926 with 43 Squadron taking up residence with Hawker Furies, Gloucester Gladiators among others during the second world war. Ref: Empire Air Day Display 25th May 1937 (29th?) '...four squadrons took part 1, 43, 72 and 87'. (Doherty, 2009)