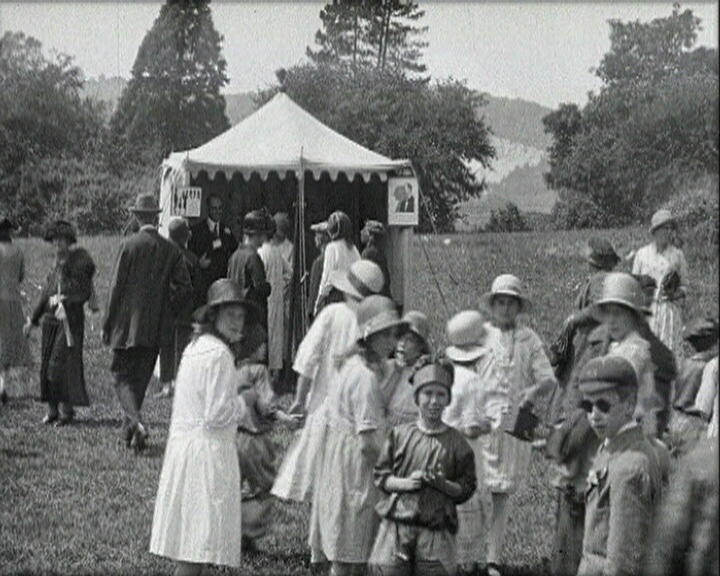 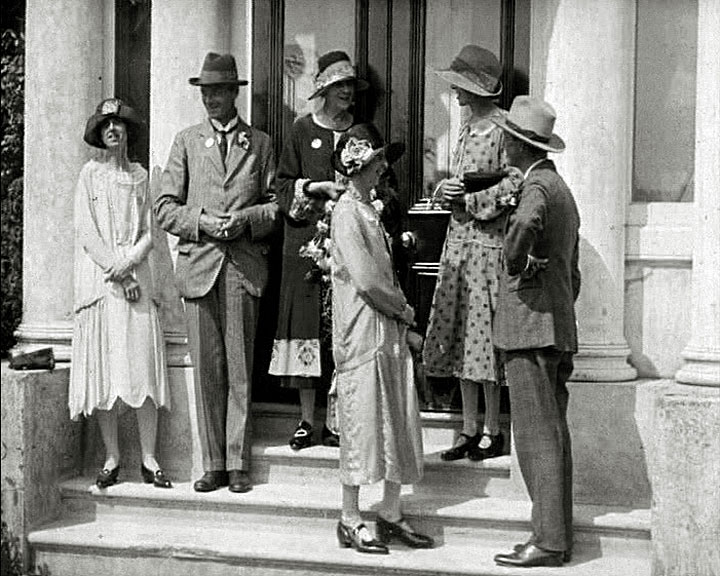 A group of men and women s pose for the camera before descending the steps outside Broughton House which is adorned with large Naval ensigns - they are followed by two men carrying a moving image camera. Posed shots of multi-generational fete-goers dressed in their Sunday best stand outside the silk stockings stall - Mrs Wreford proclaims the fete open.

The pipers of His Magesty's Scots Guards march through the grounds followed by excited children.

The vacant chairs of the outdoor Dutch auction become occupied by enthusiastic bidders - an elderly woman is handed her new purchase. Children in fancy dress stand next to a 1926 Morris Cowley car which is to be raffled.

Several scenes of the increasingly busy fete follow - the crowds and stalls are filmed from a moving vehicle. The crowds respond to the camera's approach by removing themselves from its path whilst looking directly at it in fascination - one mother holds her baby up for inspection and curious young boys in school uniforms (Dunton Primary School), including one wearing dark glasses, attempt to remain in shot.

Stalls at the fete are bedecked in Union flags and they sell food, sports & games and clothes - there is also an open-air cafe area. Close shot of a person wearing a Pierrot clown costume. More children in fancy dress advertise the fete with a sandwich board in posed shots.

The fun of the day continues with games for all of the family, including one which involves throwing balls into the open mouth of a cardboard cut-out of Felix the cat. The crowds are thronging - the camera films posed individuals, such as a pair of elderly male twins and the anonymous crowds watching a display of dancing by members of the Band of the Scots Guards.

On a hot summer's day women shade themselves with parasols and by sheltering under trees. Edited shots show a cartoonist drawing caricatures of popular figures including Charlie Chaplin and Jackie Coogan. Further shots of the camera-conscious crowds.

Intertitle: Local Snaps by our cameraman. Shaky travelling shots moving along Sevenoaks High Street, past the fountain and the shops of 'Gower and White' and 'C. Wright Costumes'.

Shaky shots of an Aero 504K biplane (G-AAGB) taking off from a grass airstrip are followed by a shot of a merry-go-round Carousel. A van follows the vehicle housing the camera along a country road. Slow motion shots captures young men attempting to eat buns hanging from string without using their hands and a motorcycle stunt display entertaining bystanders on a large open playing field. 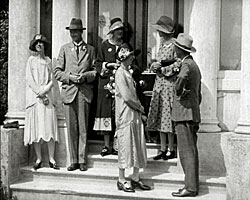 Garden fetes have had a long association with the local communities of England - the one featured in [Garden Fete at Broughton House] (1926) was held in the grounds of Broughton House, the home of the Wreford family since its construction in 1830 by silk merchant John Wreford. The Wreford family held a prominent standing in the local community - their philanthropic activities included building the church, school and many of the cottages in the nearby village of Dunton Green. One can surmise therefore that they opened up their estate to a variety of community events over the years such as the fete in 1926. The fete was held to raise money for the building of Donnington Hall on Barretts Road in Dunton Green (a village hall which opened in 1927). The fete was a significant local event - 3,000 people visited it between 2pm and midnight, children were out of school on a Wednesday afternoon and attractions such as the Scottish marching band and the raffled Morris car were expensive crowd-pleasers. Fetes feature in a number of other films held at Screen Archive South East including a hospital day fete in Bognor Regis: Out and About During the Year (1936) and a summer fete in Kent in St Mary the Virgin, Reculver - The 103 Rd Incumbent (1957?)

The film was shown at the Granada Cinema in Sevenoaks. It is doubtful that it would have been exhibited beyond the immediate area - with the emphasis being placed on filming the locals themselves and with a quick drive through Sevenoaks, this professionally produced film was probably intended purely for local exhibition: an audience would have been created by a desire to see oneself, friends and family on the cinema screen. It is interesting to note the presence of the director in several shots - he is shown attempting to control the crowds with the aid of a megaphone and a policeman when the Scottish marching band approaches the camera.

Screen Archive South East's internal database notes that the beginning and end titles of the film are missing - the last section of the film (starting with the drive through Sevenoaks) seems to have been tacked onto the end of the film and does not show the Broughton House fete - it may therefore have been filmed on different day(s). The Screen Archive South East film Look, Love and Preserve (1964) offers a good visual record of Sevenoaks in the 1960s.

"Sevenoaks Museum was first opened in 1920, and re-opened in a purpose-built space within the new Sevenoaks library in 1986. The displays use museum objects and many photographs to tell the story of Sevenoaks from the surrounding area and to illustrate life in the town over the last 200 years...The local studies room in the same building provides the more serious researcher with extensive archives relating to the local area." The museum is now part of Sevenoaks Kaleidoscope.
hhttp://www.kent.gov.uk/leisure-and-community/history-and-heritage/museums/sevenoaks-museum

The Sevenoaks Society is concerned with the conservation and improvement of the town and the local surroundings - its archive details developments which have taken place in the town. The photographic collection includes stills of the 1926 fete at Broughton House. The Sevenoaks Society has also produced a compilation containing this film and a 1964 film of Sevenoaks entitled Look, Love and Preserve (1964) (this film is also available to view at Screen Archive South East, and is catalogued on this database).
http://sevenoakssociety.org.uk/

Estate Agents particulars for the sale of Broughton House in the 1980s and 2005 are held on file at Screen Archive South East.

This weekly local newspaper is held on microfilm at Sevenoaks Library (now part of Sevenoaks Kaleidscope).