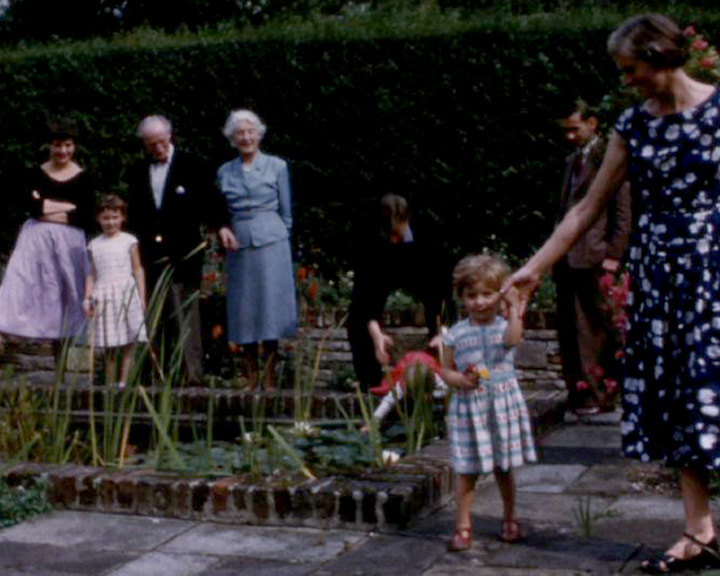 This black and white film shows a family group (mainly children) playing in the front room of a house and a toddler crawling across the carpet. The children go in to a garden to play with a dog, do gymnastics and play with a rabbit. (Note: the first part of the film is very grainy)

The next part of the film shows a small child sitting with an adult on a carpet playing with toys and then sat at a table eating and drinking tea. The same group are also seen sitting in the garden. (Note: this section is very dark)

The next portion of the film shows other family members sitting at a table drinking tea and eating. Other children plawith toys on the front room floor.

In the garden, a lady carries a child on her back, followed by an older man carrying a young girl on his back. Ttwo ladies are shown chatting; one holds a pile of baby clothes, showing them to another lady. An older lady sits in a chair holding a new born baby.

In colour film, a lady (Elizabeth Hinchliff ?) holds a young boy dressed in school uniform in a garden. An older lady stands behind her. This is followed by a group of young children dressed in tartan dresses playing in a garden, one tries to lift a garden tool to help. The same family group (ca. 1950s ?) stand around a brick garden pond talking and stroking a black and white cat that is sat on a wall.

In the next piece of colour film (late 1950s) shows a group of children playing games on the patio outside a house, possibly for a party as some have balloons (?). The children are then joined by senior members of the family in the garden to play relay race games. The film ends with: 'The End'. 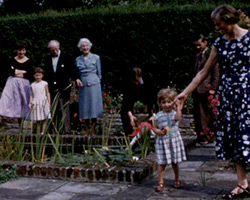