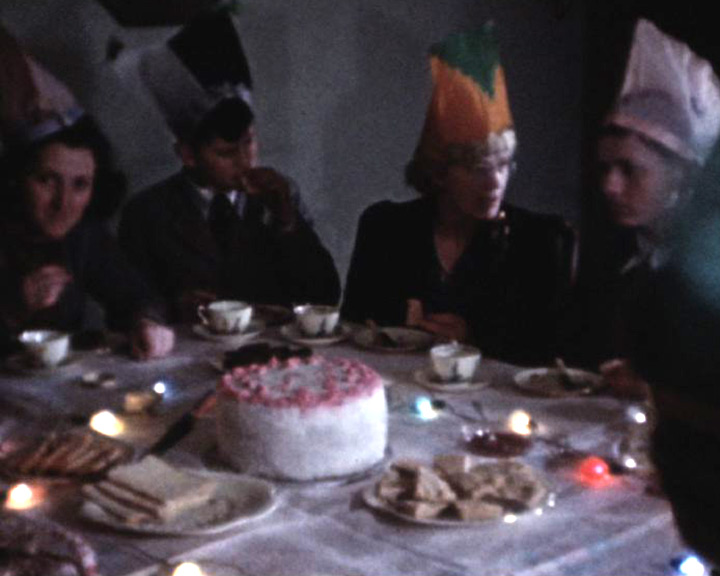 This colour film opens with the Hinchliff family celebrating Christmas. A tree is decorated with lights whilst the group sits at a table eating Christmas cake and slices of buttered bread, wearing celebratory hats. One of the family members is attempting to eat an oversize wedge of fruit cake.

In the next black and white film the children sled down a snowy hill and build a snowman smoking a pipe.

This colour film shows the family standing next to a pond in a garden where a large pet cat moves across the shot. The family sit on deck chairs in the garden and play with the children on a ride-on toy bus. A child is being led around the garden by a pet dog clutching a long branch between its teeth, tugging the child around. In the next shot a lady is seen pushing a small child sat in an inflatable sailboat around a small brick garden pond, where a second child joins in. The shot also moves to a higher position from a first floor balcony.

In colour, family members tend to the garden, being watched by a pet dog and cat. An older lady is picking flowers, whilst a child watches. A girl plays a miniature toy violin direct to camera, whilst jumping about on the spot. She is also seen playing with the dog in the garden and attempting to play croquet with an older man.

The final colour shots are of a different family group holding a young child up to the camera, while an older lady (possibly Elizabeth's mother?) attempts to get the child to look at the camera.