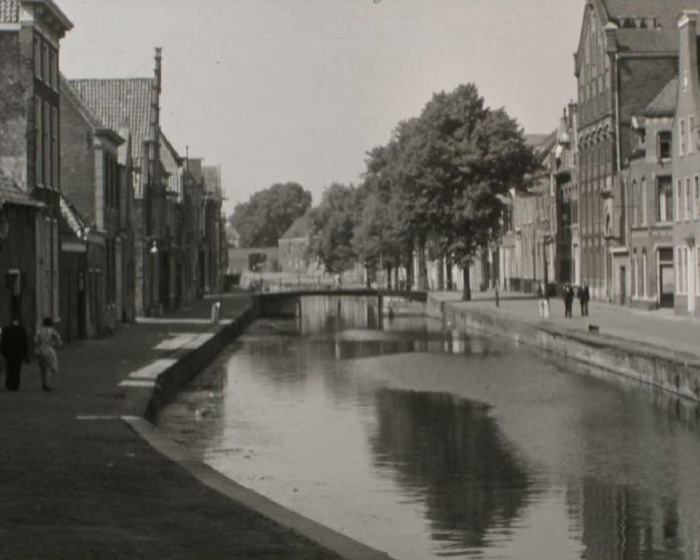 This black and white holiday film follows the Hinchliff family on holiday in the Netherlands. The family visits Amsterdam and tour the canals. Several of Amsterdam's churches and religious buildings can be seen, along with bridges and canal boats. Cyclist’s pass horse-drawn taxis on the bank next to the canals. The family ride in a car (?), (very short and bumpy shot) towards a market (?). An elaborate street pipe organ decorated in ornate scrolls and woodwork is parked in the street. The organ is on a low horse-drawn trailer.

The next section features a wide river, where small sailboats bob about. A large barge pulls out into the river carrying cargo, the skipper waves at the camera. A riverside cafe is seen in the background (De Bonte Koe?). A car is being ferried across the river on a low barge and drives off, passing a sign for 'Niemeijer's Koffie en Thee' outside a riverside cafe. Several boats, a steamer and various pleasure craft pass by. People are sitting at a table on the waters edge where several sailboats are moored. A waiter stands holding a serving tray at a table. A sign reads 'De Bonte Koe' on the roof of the riverside cafe.

The next part of the film shows the 'Hotel Duin en Daal' in the district of Bloemendaal, located in rural countryside. The adults enjoy drinks in the hotel garden.

In the next section three men sit in a restaurant overlooking a river, enjoying high tea (?). The window shutters are open and several pleasure craft drift past the window. The men twice raise their glasses in salute. In next scene on a beach, several adverts can be seen for a local paper 'De Maasbode' and a film photographic paper company 'Gevaert Film'. Covered basket style deck or beach chairs can be seen on the waters edge (?) with people on the beach.

The final section concludes the tour in central Amsterdam (?). Several electric tram carriages and street traffic pass by. A statue or monument of a person on a horse can be seen in front of an imposing building (?) where a road sign reads: 'Haarlem 42 Utrecht 62'. The camera tours by several churches, buildings and an urban residential street. The main entrance to the 'Hotel Witteburg' (?) is also shown.

The 'Hotel Duin En Daal' was built in 1907 by architect J.A.G Van der Steur as a manor House before becoming a hotel. The building is in the Bloemendaal district of north Holland and has been listed as a protected site since 1998. The Monument Number is: 511066 and further details are available in Dutch only, from the Rijksdienst voor het Cultureel Erfgoed Register of Monuments or 'Rijksdienst voor het Cultureel Erfgoed Monumentenregister
http://monumentenregister.cultureelerfgoed.nl/php/main.php.