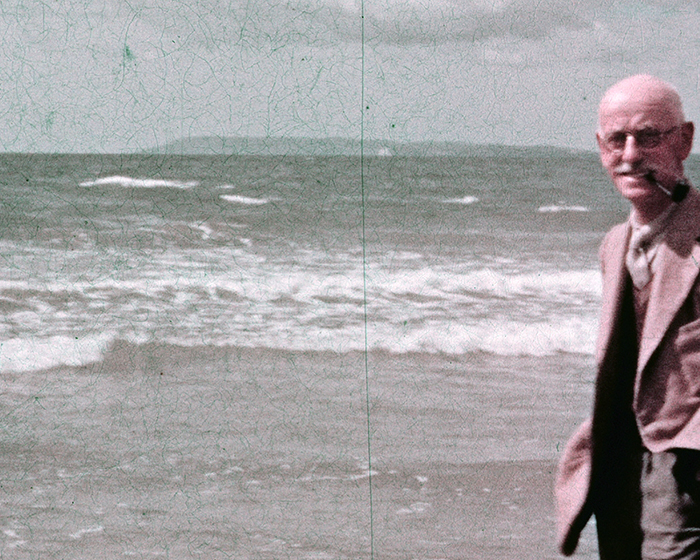 In black and white the opening title reads: 'AOH presents Holiday News of... Bracklesham' and 'Bracklesham August 1937' which is followed by an intertitle: 'Leaving home dad forgets something'. In this film the father stands outside, he then goes back inside. The next inter-title reads 'Tooth brush and alarm clock'. Dad then emerges carrying the items.

The family say good-bye to their small pet cat as they prepare to leave for their holiday. This is followed by an intertitle: 'We're Off' A lady is standing at the front door holding the cat, waves good-bye. They leave through the gate.

Intertitle: 'And lose no time in arriving at -' The family arrives at their holiday home, with a close up of the house name 'Seahome' on the gate.

Intertitle: 'We explore'. The camera then tours the garden, up some steps to show the sea view at the bottom. The view then changes to a panorama of the coastline and back round to the house.

Intertitle: 'This eating a solemn moment' The next part of the film shows the family sat around a table eating breakfast and drinking from teacups. A selection of breakfast cereals is available on the table: 'Kellogg's Rice Krispies', 'Kelloggs's Corn Flakes' and Farley's Rusks'.

Intertitle: ‘A strong wind brings sand yacht out' The family plays on the beach with a two-person sand yacht.

Intertitle' This eating is very serious' The family sits around a table eating a meal whilst chatting.

Intertitle: 'A new sport? Towel Riding' This section of the film shows Elizabeth (?) and a younger boy playing in the garden, dragging around a younger child sat on a towel.

Intertitle: 'A first riding lesson' This film shows Elizabeth (?) learning how to ride a horse on the beach. Her brother (?) takes his turn, riding close to the teacher.

Intertitle: 'The bathing parade' This colour film shows the entire family group dressed in swimwear on their way to the beach and swimming in the sea.

Intertitle: 'Uncle Bert gives a lesson in fishing'. This black and white film shows ‘Bert’ demonstrating how to line fish. Intertitle: 'What is the catch?' Elizabeth (?) and her brother reel in the lines, having only caught seaweed.

Intertitle: 'Our visitors depart' Several family members including ‘Uncle Bert’ leave the holiday house and get into a car.

Intertitle: 'The girl next door'. The children play another game of ‘Towel Riding’ in the garden, whilst the family sits on the lawn.

Intertitle: 'Last trip on duck pond. The family sit in wooden boats on a lake or pond, watching the ducks. Elizabeth (?) clutches a large doll with her in the boat.

Colour film shows the Bracklesham Bay coastline at dusk (?) looking out to sea; the waves crash on the shore.

Intertitle: 'Homeward bound'. The family pack their suitcases and prepares to leave their holiday home. Two cars travel in convoy through the village past a windmill (Earnley Mill, near Bracklesham Bay?)

Intertitle: 'Home again - but still hungry' This final colour film shows Elizabeth (?) leaning on a table next to a toddler at their home in Croydon. The film ends with black and white textured title: 'The End' 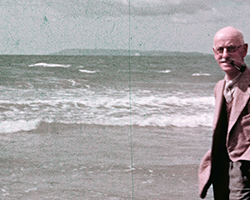