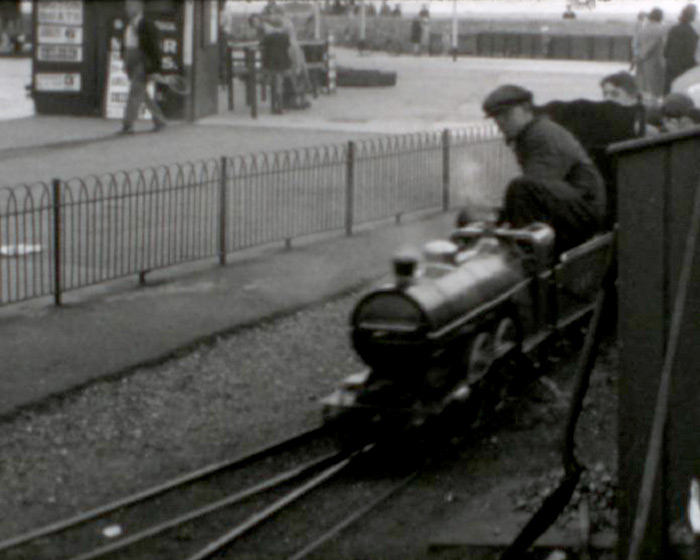 The first part of this film, in colour, shows various views of the castle and village at Arundel, looking across the river Arun, and Arundel Bridge.

The next section opens with a black and white tour (from the entrance) of the castle and grounds. It then changes to a full colour tour of the roof-line and interior scenes. School children are wandering about in the main courtyard. The tour continues back on the roof with close-ups of the flint and stonework, and a pair of green oxidised canons. A black and white sequence with intertitle: 'Arundel Park' opens the next section, followed by mixed shots of the park and Swanbourne Lake. Ducks and geese are splashing about on the water. Swanbourne Lodge features in the background.

In the next black and white section, a railway bar and roundel sign reads: 'Southsea' on the gatepost to a small miniature steam railway and station house. A miniature steam engine is seen on a track, with a young driver sitting dressed in overalls and a flat cap. The engine is marked 587 (?) and ' SMR' with adults and children aboard the passenger carriages behind, waving at the camera.

In the next section, a family group enjoy a day out on a boating pond, steering wooden boats (possibly at Bracklesham Bay?), trying to avoid crashing into each other. The final section of the film shows coastal shots, filmed from the shoreline, with a large single funnel paddle steamer on the sea.

'Around the Isle of Wight'

This section shows a tour of the Isle of Wight aboard the steamer 'Lorna Doone' from South Pier, Southsea (?). The steamer is filmed docking and picking up passengers at Sandown and Shanklin piers. At Sandown a large banner on the pier reads: 'This is Sandown - Sunniest resort in Britain'. At Shanklin, 'Shanklin Pleasure Pier' and the words 'Teas Dancing Band' are painted on the side of a building on the pier.
The camera then moves along the coastline towards the lighthouse on 'The Needles'. Close-ups of the rock face and the lighthouse are seen. Further coastal shots of Alum Bay follow. The film ends with the steamer entering a bay.

"...developed as a Saxon town [and] referred to in the Domesday Book in 1086, Arundel had become a flourishing market town and port, with a population of a few hundred. In 1243 Arundel Castle came to be owned by the Fitzalan family then at the end of the 16th century the castle and Earldom was passed to the Duke of Norfolk. The Dukes dominated Arundel for centuries and during that time Arundel was a busy international port, with ships sailing to and from Arundel via the river Arun to the sea 5 miles away. Arundel was also an important market town and in 1285 it was granted an annual fair where people came from a wide area to buy and sell. In the mid 13th century the Dominican friars arrived giving Arundel its first religious building, locally referred to as Blackfriars, the ruins of which are located next to the Town Bridge. The parish church of St Nicholas in Arundel was built in 1380."