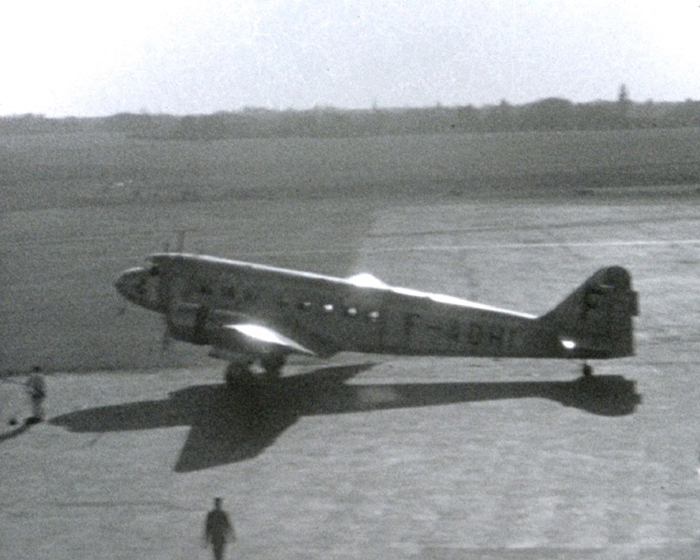 This compilation of edited colour and black and white films shows places of interest in Croydon, Surrey. The film has intertitles throughout. The opening title reads 'Croydon Beautiful' over landscape shots of fields. Colour shots show cherry trees in blossom. The tops of cars are seen moving at the bottom of the picture and two children are seen walking under the trees.

In black and white, brief street scenes are followed by views from the top of the Croydon Aerodrome terminal looking out towards the runway. Several aircraft can be seen landing, stationary and taking off. A small Air France plane F-AQNK [Bloch 220 'Anjou' ?) lands and passengers disembark onto the runway. An Imperial Airways (?) flight 'G-AFDK' (DH91 Albatross ?) is on the runway. A second plane: 'G-ACTT' (DH 89A Dragon Rapide ?) is slowly taxiing down the runway and takes off and is followed by an Air France plane F-AOA (?) on the runway. Air France plane 'F-AOHI' (Bloch 220 'Berry' ?) lands on the runway whilst G-AFDK starts up her two right engines, the propellers spin, in preparation for movement. A group of spectators on the roof of the Aerodrome terminal building watch the aircraft below.

In the next section, long black and white panorama shots taken from on top of Park Hill Water Tower shows the residential area below. The camera moves across the residential skyline of Croydon, with a biplane circling in the sky above. A Power Station (?) and Gasworks can be seen in the distance along with Croydon Clocktower and the Town Hall. The Park Hill Water Tower and wind vein is also seen viewed from the top and from the ground.

This section of the film shows two children and a man dressed in outdoor clothing playing on a wooden bench and running up and down a wooded hill towards the camera. The children climb several small trees and sit in the branches.

A family group are seen walking up a steep hill towards the camera dressed in outdoor clothing. Two of the children play in a tree and a woman and girl play with a ball. The little girl drops the ball and it bounces down a gully. Various shots show the children running about and walking through the woods.

Mixed night-time shots of Croydon Town Hall and the high street illuminated, in preparation for the coronation of King George VI in 1937. (Blurred and difficult to make out action).

The final part of the film in both colour and black and white, shows several landscape views of Kings Wood at different times of the year. In spring, a carpet of bluebells lines the wood, as an extended family enjoys a day out.

Croydon Aerordrome or Airport was built in the 1920s constructed on land that comprised two former first world war airfields - Beddington (1915) and Waddon (1918) aerodromes. These where then closed in the 1920's to merge the runways together and construct the new terminal buildings which opened in 1928. The new buildings and runway created the first purpose built airport of its type. Croydon Airport was then closed to civil aviation and used as an RAF fighter station from the start of WW2 in September 1939.