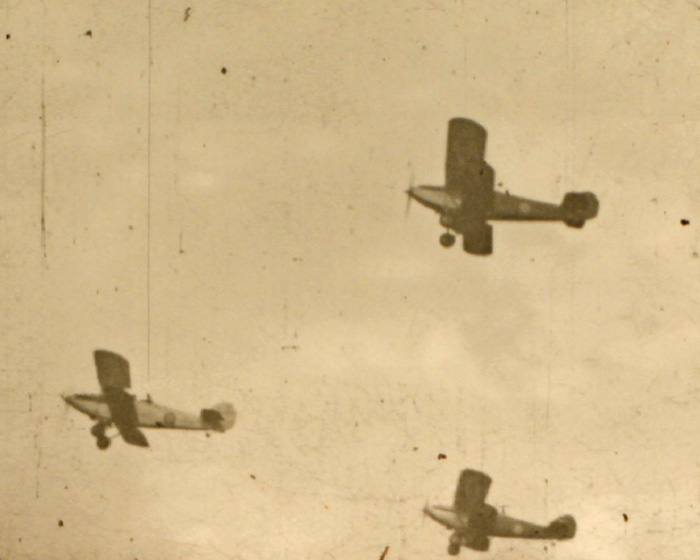 At Shoreham Air Show various propellor driven fixed wing planes stand stationary on the airfield as well as taking off. A pilot stands upright in the cockpit of a GAL ST 25 Monospar Ambulance aircraft [G-AEGX], a De Havilland DH85 Leopard Moth [G-ACLY] stands stationary on the grass, followed by shots of a towing vehicle and spectators walking amongst the aircraft.

The scene cuts to a large gathering of people standing around a car with the flag of St George on the bonnet ornament (?). Various shots of aircraft on the airfield include: an RAF Hart (Special) bi-plane aircraft [K4433]; an RAF Tiger Moth [K4257]; close up of two pilots in an open cockpit bi-plane aircraft (?); a fixed wing Foster Wikner aircraft Wicko GM1 [G-AEZZ], a [K4429] Hart (Special); a [G-ACFF] De Havilland DH83 Fox Moth followed by a panoramic shot of several other parked aircraft, being tended to on the airfield by a ground crew.

Further aircraft include: a [G-ABGS] De Havilland DH80A Puss Moth passing through shot; a [GACTT] De Havilland DH89 Dragon Rapide on the airfield with boarding steps, seen from several angles; a single single fixed wing aircraft marked U3 (?); several shots and angles of a [G-ACFC] De Havilland DH83 Fox Moth on the airfield, with a pilot and a family group approaching the aircraft. The pilot allows the child to board the craft and sit in the cockpit before the plane takes off. A Supermarine Walrus [L2246 on tail, possibly from 277 squadron RAF?] passes through shot. [K6324]; an Avro Anson MK1 passes through shot and turning on the airfield, with the chapel of Lancing College visible in the background. Several bi-plane aircraft are seen in flight including a squadron of Hawker Fury MK1(?) [RAF 1 Flight Squadron]; Avro Anson MK1 [K6324]; a Fairey Battle I [K7598 - possibly from 35 Squadron RAF?] along with a fire engine and ambulance on the runway. The film continues on TID: 8598 with a series of air display sequences, seen from the ground at distance.