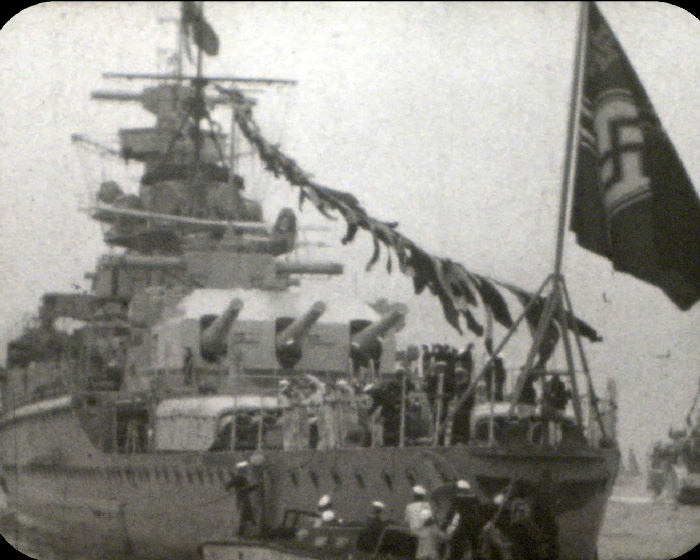 The film opens with scenes of Rottingdean high street and duck pond. The roads are empty. An intertitle reads: "Even the duck is asleep" followed by a shot of a duck resting by the pond.

A policeman stands on traffic duty at a crossroads in Rottingdean, dressed in a long white coat. A series of scrolling intertitles read: "But coronation week finds everybody in a tearing hurry'" followed by a speeded up sequence showing the policeman, traffic and pedestrians passing through the street. Intertitle: "Traffic control is no easy matter" with close up shots of the policeman frantically directing traffic and pedestrians across the street (speeded up). A view from an upstairs window shows bunting hung from buildings, and a long queue of people waiting to board an open-top bus.

Intertitle: "Torch lights in the night'" followed by a night time shot of a procession of flaming torches. Intertitle: "Rottingdean's coronation beacon" followed by views of the beacon at night, the silhouetted figures of a crowd visible before the flames and billowing smoke.

The next section of the film features footage shot at the Coronation Naval Fleet Review at Spithead, Portsmouth on May 20, 1937. An opening title reads: "Vast crowds collected for the review" with crowds seated on the promenade and shoreline, the stands decorated with flags and bunting. The camera pans to show boats on the water, and a motorboat in the foreground.

Intertitle: "This yacht is conveying the Royal family to review the fleet". There follows several shots of the Royal yacht HMY Victoria and Albert III, showing the exterior in profile and several decks of the boat [shaky]. Intertitle: "Almost every nation was represented". with warships hung with bunting, and smaller vessels in the foreground. Intertitle: " 'The 'Graf Spee', latest type of German warship known as the pocket battleship". with several shots of the ship, including a slow pan of the rear of the boat flying the Nazi/Third Reich flag.

Intertitle: "On her deck we see, mounted high up...Her new "eye" in the shape of this beautiful seaplane". A close up follows of the bi-plane on the deck of the ship [60-E81] .

Intertitle: "HMS Furious and Courageous. Aircraft carriers. These ships are able to carry about thirty aeroplanes'" accompanied by a series of shots of the ships in close-up, showing the deck and signal flags. The closing titles read 'Long live their majesties. The End."