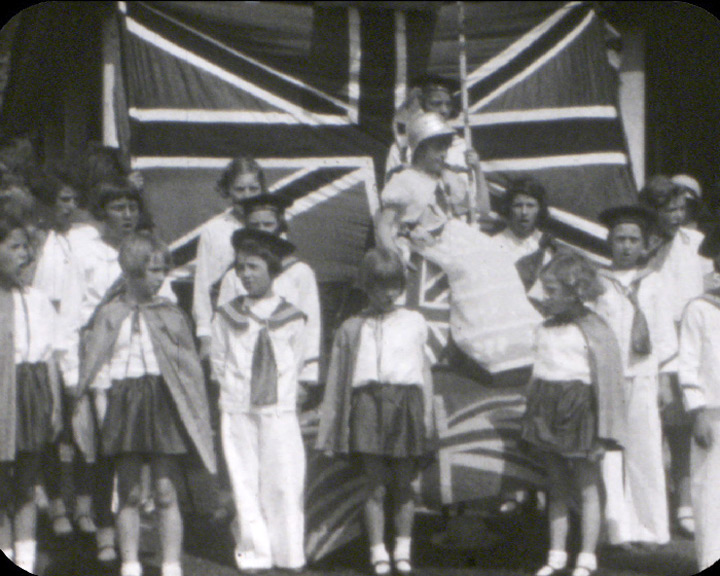 Intertitle: "Western Road Brighton". The first shot shows a view of Western Road decorated in buntting and decorations marking the Jubilee. The camera pans up to a large floral banner bearing the letters 'G R'.

Intertitle: "Peacehaven. The Procession arrives at the Park". A procession of children flows into the park beside the Pavilion Theatre Cinema in Peacehaven. The film fades down and up again to reveal crowds holding union flags gathered around a central flag pole.

Intertitle: 'The Rev. J. Whittle conducting the Thanksgiving Service'. A view from above and behind shows the Reverend on stage addressing the crowd. An intertitle reads 'Are you here?' and the camera pans across the assembled crowd, moving to a position in the crowd, to show many people with their heads bowed as if in prayer and the speaker on the platform. Others watch from the tiered garden behind. (Several shots are solarised).

Intertitle: "Patriotic dance by the pupils of St. Philomena" followed by shots of groups of children performing dances in traditional dress and costume that includes wearing kilts and capes. The girls dance in checked dresses and tall hats.

Intertitle: "Empire Tableau" precedes a panning shot of the children in costume, with the central figure of a child dressed as Britannia, wearing a helmet and holding a sword and shield. Either side stand boys in sailor uniforms. A sign attached to a large union flag behind the children reads: 'Health and prosperity to their majesties'.

Intertitle: "Country Folk dance by The Council School Children" "Jenny Plucked Pears" Children are seen dressed in flowing dresses and bonnets, dancing in pairs. Intertitle: "The spiders web", showing a series of shots of a maypole dance. Intertitle: "Brighton cam[e] by the Babies", where pairs of younger children dance together, the girls wearing bonnets, the boys in knee-length shorts. A wide shot shows the dancers and surrounding spectators in the park gardens, accompanied by a closing title: "So we leave the little children... still dancing... very happy".

The next section opens with an Intertitle: "Rottingdean. A few more of the merry throng". To reveal a crowd gathered in an open-air outdoor space. Further Intertitles read: 'Open air dancing. Two little girls started the dancing"; inter-cutting scenes of a tennis court showing two girls wearing tea dresses attempting to Waltz together, followed by a group of adults joining in, later forming pairs, some of just women, others adults and children.

Intertitle: "Rottingdean's gigantic beacon" followed by a series of shots of several figures dwarfed next to an immense bonfire, stacked with wooden barrels and crates, topped with straw and a tiny flag flying on a pole. A car parked beside it illustrates the scale of the bonfire pile. A title informs the viewer: "And so... through out the British Empire, beacons were lit to commemorate the Jubilee". The beacon is lit, with the silhouettes of spectators visible in the foreground, flames reaching high into the sky and items being cast off as they burn. The closing titles read: "God Bless our King and Queen. The End"