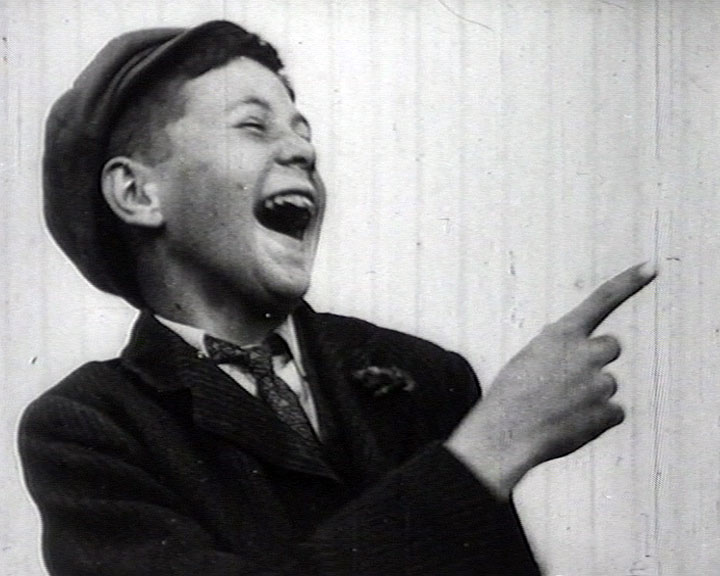 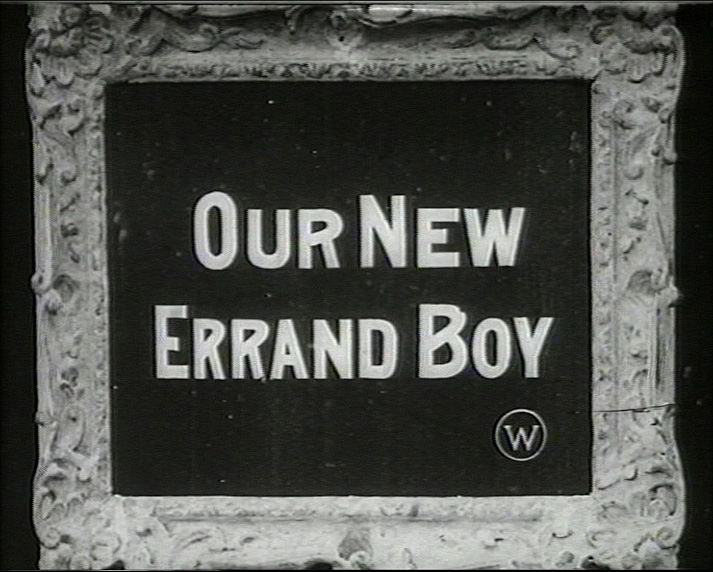 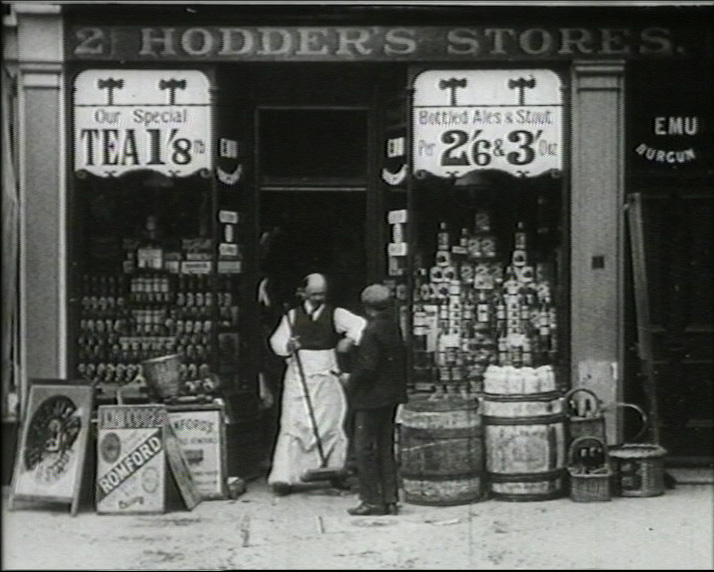 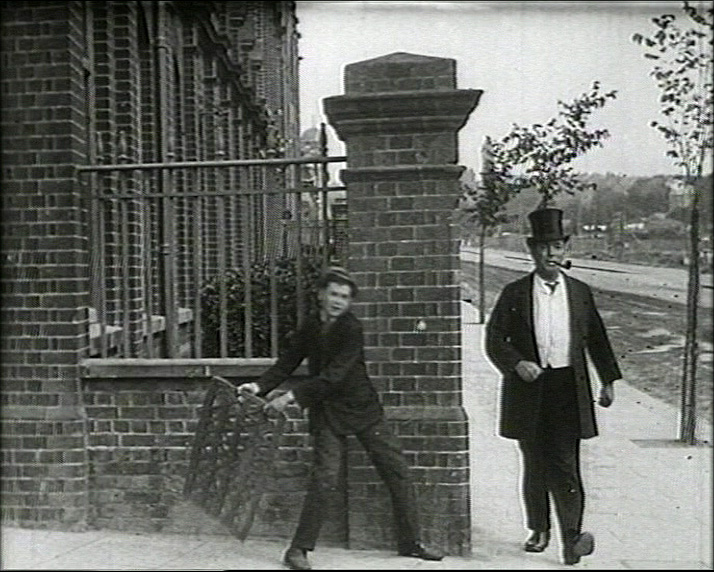 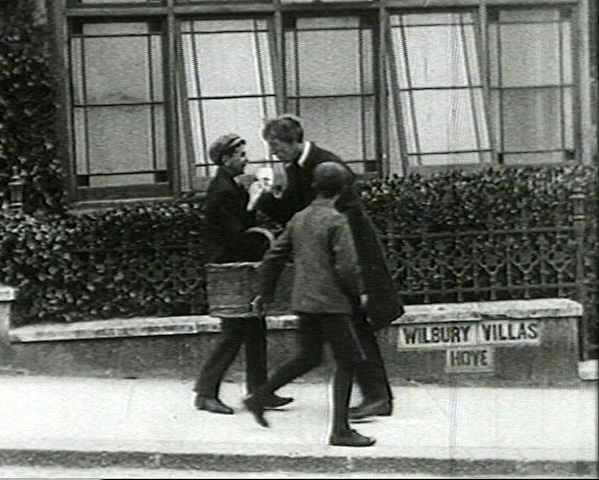 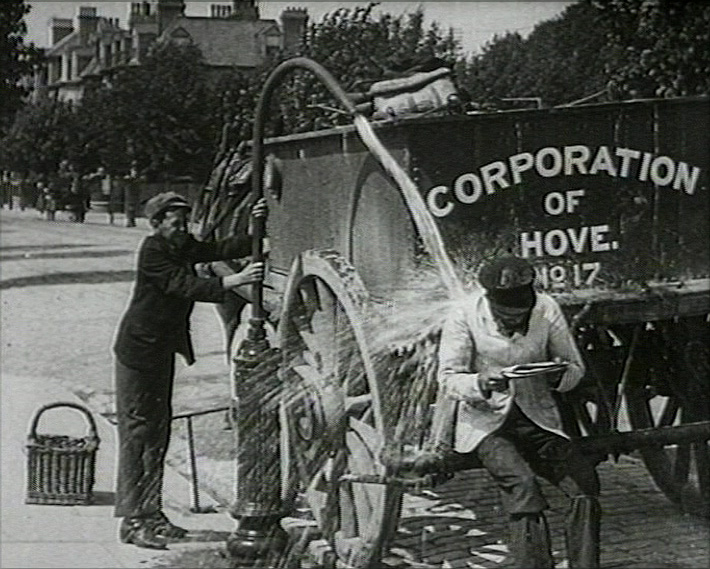 A young errand boy causes trouble, terrorizing the residents of Hove, in this 1905 film by James Williamson.

A title card reads "Our New Errand Boy". The film opens at a double fronted shop selling tea and alcohol. A young errand boy sweeps the pavement in front. The owner asks him to clean a mat from the shop floor but he throws the dust into a man in a top hat. The boy returns to the shop and continues to sweep after taking the broom back from the owner. Swinging the broom over his shoulder, it hits a policeman round the head. Laughing, he takes a basket of [?] from the owner and joins another boy carrying a similar load. He knocks [?] out of the other boy's basket, spilling liquid all over the his jacket. Again, the errand boy laughs and runs off to cause more havoc. He plants a trick package on a string in a street with another boy. A passing woman places it in her basket before the boy pulls it back as she walks on. The contents of her basket fall onto the ground and a priest comes to help her. The priest runs after the troublemaker, shaking a hanky at him. The boy sneaks a bag of flour into the man's hat, which he promptly empties over himself when he goes to put it on. The man tells a passing policeman about the boy by a street sign reading "Wilburry Villas Hove". Meanwhile, the boy pulls a water pipe away from a cart towards the man seated at its rear before running off once more. Back at the shop, the various prank victims march furiously inside to speak to the owner. The errand boy unknowingly follows them in but runs straight out again, chased by the adults. He hops over a garden fence and sprays them with water from an abandoned hose pipe. All climb over after him but the boy has climbed into a hole the others cannot get through. They nearly catch up with him but end up trapped inside a chicken coup [?]. Laughing and teasing the victims, the errand boy marches up and down, banging a basket as a drum. The film closes with a close-up of the laughing troublemaker.

Barnes, John. The Beginnings of the Cinema in England 1894-1901. Five Volumes, n.p. University of Exeter Press

Date: 1996-1998 All five volumes of John Barnes’s archaeological study of early cinema charts its development between 1894 and 1901. Barnes founded the Barnes Museum of Cinematography with his brother William in the 1960s. The collection provided primary material for Barnes’s study of early cinema.

Date: 1996 Published on the occasion of the 1995 University of Brighton exhibition concerning the work of George Albert Smith and James Williamson. Essays included are by John Barnes, Ine van Dooren, Frank Gray and Martin Sopocy.

Location: Hove Museum and Art Gallery Twins John and William Barnes founded the Barnes Museum of Cinematography in the 1960s. After the closure, the early part of the collection moved to Hove. The collection includes cameras, projectors and material relating to the Brighton School of film pioneers.
http://brightonmuseums.org.uk/discover/2015/02/26/the-barnes-brothers-collection/