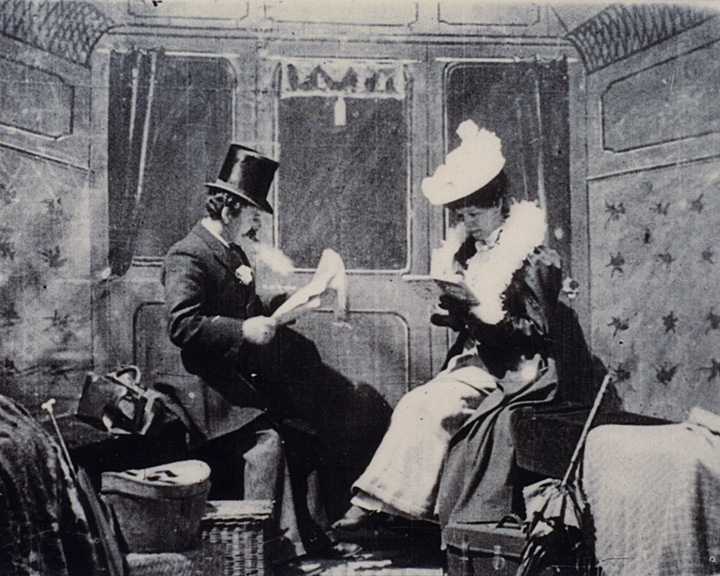 A studio scene in which a couple kiss inside a train carriage, bookended by footage shot from the front of a train as it enters and emerges from a tunnel, produced in 1899 by George Albert Smith.

The film opens with a stationary shot of a train exiting a tunnel. The camera starts to inch forward along the tracks, shot from the front of another train to show the driver's point of view. The train and camera enter the tunnel. Inside the train, a couple face each other in a carriage, surrounded by their belongings. The man pinches the woman's cheek affectionately. He takes off his hat to kiss her first on the lips and then both cheeks, taking advantage of the darkness outside the carriage. She blushes, shaking her head and smiling. He sits back onto his top hat, crushing its crown. He corrects the shape and they continue to read. The film closes as the train emerges from the tunnel, shot from the driver's point of view once more.

The central scene of The Kiss in the Tunnel is the only original footage, shot in the studio and edited into Cecil Hepworth's Train Entering and Exiting a Tunnel (1899). Splicing and cutting techniques, developed for lantern projections, create a sense of continuity and sequential narrative.

The Warwick Trading Company, run by Charles Urban, offered exhibitors the studio shot, which could be spliced into footage shot from a moving train already in their possession. Smith's film was remade by James Bamforth the same year, in which the central scene is bookended by shots of the train's exterior and the 'kiss in the tunnel' becomes a passionate embrace.

Date: 1981 This book is concerned with the influence of magic on film.

Barnes, John. The Beginnings of the Cinema in England 1894-1901. Five Volumes, n.p. University of Exeter Press

Date: 1996-1998 All five volumes of John Barnes’s archaeological study of early cinema charts its development between 1894 and 1901. Barnes founded the Barnes Museum of Cinematography with his brother William in the 1960s. The collection provided primary material for Barnes’s study of early cinema.

Date: 1996 Published on the occasion of the 1995 University of Brighton exhibition concerning the work of George Albert Smith and James Williamson. Essays included are by John Barnes, Ine van Dooren, Frank Gray and Martin Sopocy.

Location: Hove Museum and Art Gallery Twins John and William Barnes founded the Barnes Museum of Cinematography in the 1960s. After the closure, the early part of the collection moved to Hove. The collection includes cameras, projectors and material relating to the Brighton School of film pioneers.
http://brightonmuseums.org.uk/discover/2015/02/26/the-barnes-brothers-collection/

Bottomore, Stephen. “Smith versus Melbourne Cooper: An End to the Dispute.” Film History 14.1 57-73

Date: 2002 This paper explores the debate between those who claim a number of films were directed by George Albert Smith or Arthur Melbourne-Cooper. These films include Grandma’s Reading Glass, As Seen Through a Telescope and The Sick Kitten.

Date: 2009 This paper explores the role of early colour film in the dissemination of royal events.

Who’s Who of Victorian Cinema online

"A guide to over 300 leading figures in Victorian cinema, defined as filmmaking in its broadest sense from the first glimmerings in the 1870s to the death of Queen Victoria in January 1901.
http://www.victorian-cinema.net/