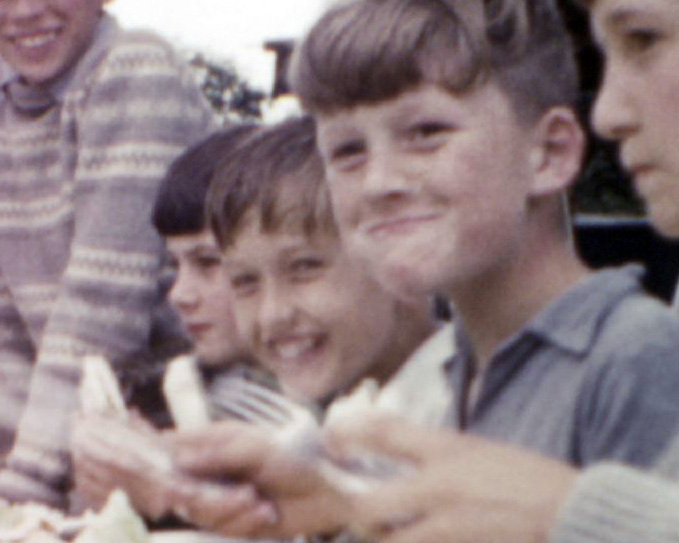 'Balcombe and Cuckfield Cubs in Camp'

The titles continue: 'Packs first combined camp - Incharge Mrs F Harbridge District Cubmaster - Mrs J Trinick Balcombe Cubmaster - Cub Instructors Kim Senior Scout John Trinick and Rickki Miss P Tewson' (sic)'; 'Film Produced by A. Nixey commentary by Mrs J Trinick'; 'I would like to thank the cubs and those in charge of the camp for their kind support in making this film possible. Arthur Nixey' This film opens with views of the camp and the cubs and cub leaders making breakfast, undertaking their morning routines, and helping prepare their lunch. The pack stand in a circle around a flag pole to raise the flag and say their Scouting oath, followed by several Cubs having an afternoon meal of mashed potatoes and meat, with rice pudding and cream for desert.

On camp, a close-up of a blackboard with a message that reads: 'The film man came and took a picture of the flag' is followed by shots of boys playing a game of rounders with a stool ball bat, then climbing in a tree. A group of boys are then shown making sandwiches with a cub leader and sitting together to eat their meal. Mixed shots follow of the boys being given cups of tea at camp and the boys washing up plates in buckets. Further shots show the group lowering the camp Union flag and saying their oaths, followed by the boys washing their faces using water from a bucket and a towel and the boys around a camp fire socialising and singing songs. End Title: 'The End'.

A wide panorama shows the pavilion building and adjacent sports field. Short shots then show the sports events with children taking part in a mix of different events including: a skipping race; mixed agility course race; a short distance running race and a relay race. The film then cuts to a group of Cub Scouts with a trophy, followed by several rounds of Tug of War events. End title: 'The End'.

'The Gardens of Mrs Ravenscroft June 1961'

This section opens with a group of Brownies and Girl Guides playing games in a garden accompanied by adults in uniform. A portrait view of a Scout leader and a group of boys in a garden is followed by the group of Girl guides and Brownies watching a costumed performance of Peter Pan in the garden. The film then cuts to Girl Guides and Scouts on a rope swing and a mixed group of children playing in the gardens amongst the rose bushes. End title: 'The End'.

An amateur fiction film (comedy slapstick style) features two boys playing and stage-fighting together in the countryside. The film has been speeded up to make the actions seem over exaggerated.

A commercial Pathescope film has been inserted by the film-maker showing: 'Pathescope presents Charlie Chaplin in 'Charlie's Lunch Hour'. [This commercial film is not included in the online clip]

Title; 'Trip to London Zoo 1959' This section opens with a family on a trip to London Zoo making their way into the park. Views of a Panda in an enclosure; a pair of rhino; a peacock; pink flamingo on a pond; macaw parrots on a perch; a pair of pelican; a polar bear standing on its hind legs in an enclosure; a pair of brown bears; emperor penguins; a goat grazing; an elephant performing to the public; and members of the public having their photographs taken with an elephant. Portrait shots then follow of an an African and Indian elephant; an otter rolling around on the ground; a giraffe and mixed views of a canal boat on the adjacent waterway (Little Venice?). End title: 'The End'.

The film of London Zoo leads directly into a the next section of the family trip to Chessington Zoo. The film opens with a view of the Modernist exterior 1930s style archway with lettering `Chessington Zoo' at the front of the park, followed by views of a tiger in an enclosure and two young boys playing on a slide in a playground and on a large boat swing. The family then tour the zoo capturing mixed views of the animals including an elephant (pink cast), giraffe, pink flamingo, a chimpanzee in a cage having a snooze; a bear in a cage climbing upside down from the top bars, and other large animals. The family next tour the miniature railway, play on the boating lake and watch the Guineas Festival Clock time piece. The section closes with an end title: 'The End'.

The next section opens with views of a working farm, where several farmers harvest potatoes in a field by hand, followed by views of several men re-thatching a a roof. This is followed by mixed shots of the farm livestock, with views of pigs and cows in a field and a man shovelling manure into the back of a truck. The film ends with a man cutting a hedge using a scythe. End title: 'The End'.

The next section shows a small school or village fair, with a young boy and man playing a game with an air-gun shooting at targets (?). This is followed by wide views of the garden with dancers a on a small platform stage and wide views of visitors socialising and playing games including a tabletop horse racing game. End title: 'The End'.

The final section shows a man sitting on a bench in a garden nodding off, repeatedly rocking forward as he tries to sleep.