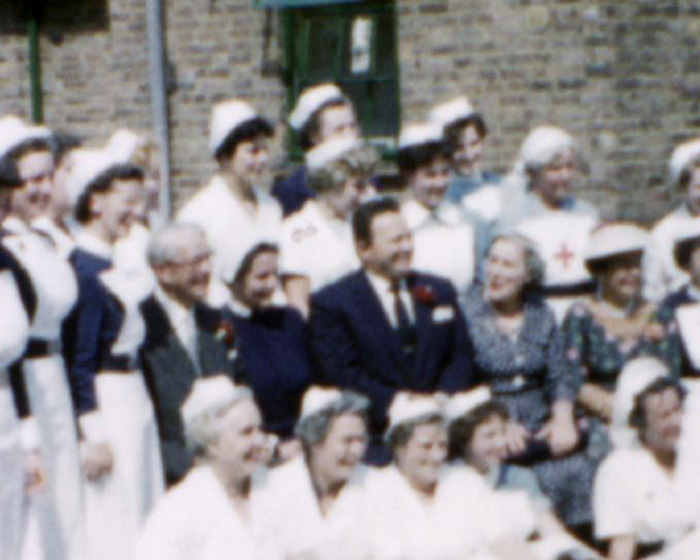 This film opens with a sign that reads: 'Once more and spread with feeling ... Robert Morley at Cuckfield Hospital Fete on June 6th' followed by views of a raised narrow gauge ride-on model railway, with an engine driver and group of children on board. Spectators watch the ride from behind a safety rope. A group lead donkey rides through the village, followed by views of people playing games and amusements on the stalls.

The next section of the film opens with a sign: '08/06/2020 July 15th 1959' set in the hospital grounds, opened by Harry Secombe' followed by views of the grounds, stalls and visitors playing the games. The hospital directorate and nurses in uniform pose with Mr Secombe for photographs outside the main building. A group of nurses are made to pose kissing Harry Secombe as his photo is taken. In the next scene the Royal Sussex Regimental band plays for the watching crowds in the hospital grounds, followed by short individual shots of two boys playing with a standing water pump engine (?), a sign stating 'This way for Beer and Skittles' with a shot of a man playing skittles; and views of a hospital bed covered in coins with a sign 'Cover the bed in coins'. A group line-dancing to the band ends the sequence.

The next section opens with a group gathered in front of a pavilion building on a recreation ground (possibly in Balcombe ?) listening to speeches for a grand opening. This is followed by views of mixed activities including a Scouting group parading on a field; people throwing balls at a coconut shy, a game of skittles and spectators watching a St. John's Ambulance cadet group demonstrate emergency first aid techniques. The sequence ends with shots of several children running races on the sports field, a family picnicking on the grass, a boys sack race, 'wheelbarrow' races ending with a parade by cadets from the St. John's Ambulance.

The final section shows the 'Dolphin Fair April 30' (Haywards Heath) in 1960, opening with the main parade being led by the Salvation Army marching band through the village followed by several locally made and sponsored decorated floats. These include: the 'Sussex Road Junior and Inter group - Methodist Church', 'Weetabix', 'Hooper Sturve Dry Ginger Ale' 'Dorothy Perkins' and the 'Red Cross'. The film ends with a brief view of a fairground on Victoria Park (?) Haywards Heath.