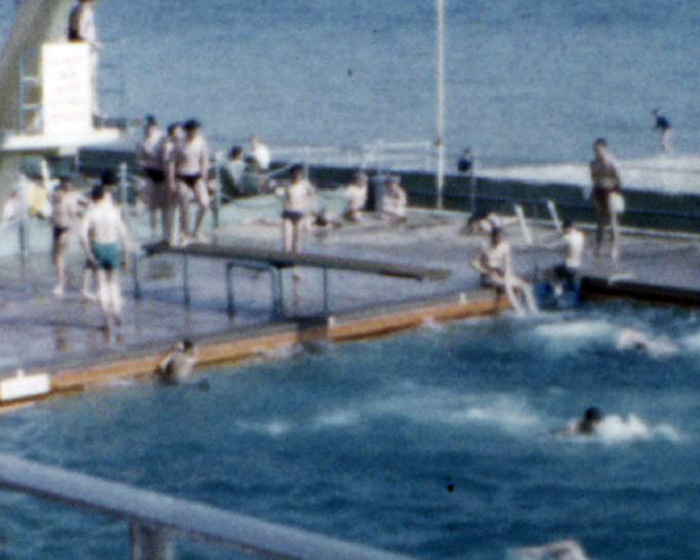 This film profiles central Brighton and the seafront, with street scenes along North Street and Queen's Street, up to the 'Southern' Railway station in green livery colours. The tour continues with views along Marine Parade with the Queen Victoria statue and Steine Gardens adorned with flowering plants and fountains. Views of St Peters Church up London Road follow, accompanied by views of Marine drive (roundabout) up towards Grand Parade with shops and Regency buildings next to the main road. A view of the front of the clock tower on 'The Palace Pier' (now Brighton Pier) with shops and kiosks is followed by coastal views of Brighton Beach towards Madeira Drive along the front from the pier. Views follow of the Victorian ironwork and cafe on the Palace Pier with a large sign 'Palace Pier - Brighton Greets You' with the Union flag above. Below the pier bathers jump off the pontoons and into the sea, with views of children playing on the shoreline where the beach is busy with holidaymakers. Mixed views follow of the Palace Pier from the beach.

The film then moves up the beach towards Black Rock, capturing short views of Peter Pan's playground and amusements on the sea front, with cars on a circuit for the 'Electric Speedway'. Views of the Volk's Electric Railway' Aquarium Station' and 'Black Rock Station' follow. The shots then move to the Black Rock Lido with children diving off a diving board and swimming in the pool, returning to a view of two trains on the Volk's Railway ferrying passengers. The shots then cut back and forth between the amusements at Black Rock which include: views of a children's playground; the Junior Speedway with miniature cars on the tracks; Peter Pan's 'Junior Roller Rink'; a jungle-themed roller-coaster; a sign 'Peter Pan's Playground'; an aeroplane ride and 'Peter Pan's Jig saw Railway' with a train named 'Bessie', accompanied by mixed views of the train moving around the track.

On the beach, workers move shingle using a tractor with views of a pier in the background (?). RAF vehicles and planes are parked on the lawns next to the sea front. This is followed by mixed close-up shots of an RAF Association flag on one of the stalls with views of several military aircraft parked on the grass close by. Views of Motor Boats on a boating Lake with people playing with motorboats are followed by views of the promenade next to the beach where children take it in turns to drink from a water fountain and others play in a paddling pool. A wide view of another 'Boating Pool' is followed by children playing on a train-based amusement ride (?). The camera then moves on towards Hove sea front, capturing views of Hove Bowling Green with several teams playing games on the green to end. The film closes with an end title.