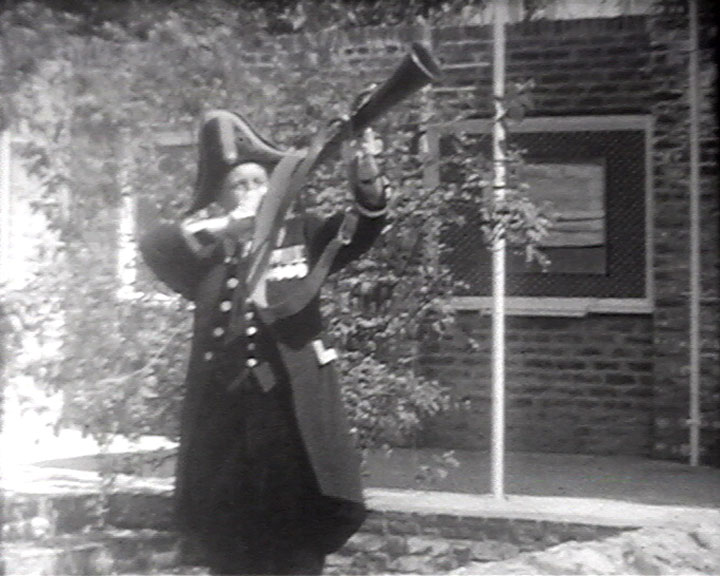 The film opens with scenes of people gathering outside the Cathedral for the 'National Pilgrimage' at Canterbury and cars arriving for a vintage car rally. A Newspaper headline from the Kent Messenger reads: "Canterbury gives a message to the world, Brilliant scene at city's great Festival service" and crowds and dignitaries are shown gathering in front of cathedral. Scenes from "The Canterbury Exhibition" include a procession of dignitaries, an opening ceremony, outdoor sculpture and a wall plaque for the "Canterbury Festival 1951" Another newspaper headline reads: "Duchess of Kent’s festival visit to [city], to see Canterbury Exhibition and Play on Monday”. The Duchess arrives with the Mayor and greets people. Another Newspaper spread has pictures from the "East Kent Towns Procession Through Canterbury". The parade includes floats with tableaux of mediaeval kings and queens, farmers, and nurses. There are people dressed as nuns on horseback, people riding on penny farthings, a marching pipe band, vintage vehicles, a horse and carriage, and a float for J.J.Williamson & Sons Ltd Tanners with people dressed as cowboys. There are members of the fire brigade in formal dress, people dressed as Romans and Lord Nelson, and a float for British Railways - Southern Region - Ashford Works. A final title reads: "Canterbury cricket week, Kent v Middlesex". There are scenes of cricket players walking out of the pavilion and the cricket match. The film ends with an advertisement for "Eagle Photographic Service" in Swindon.