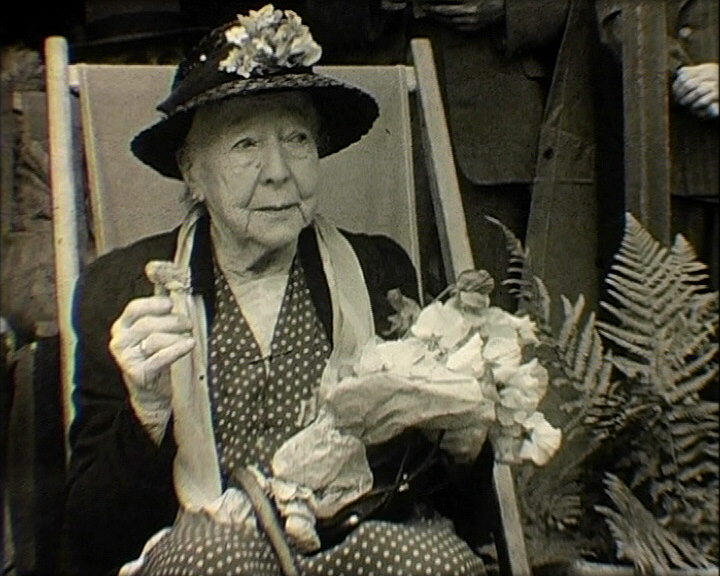 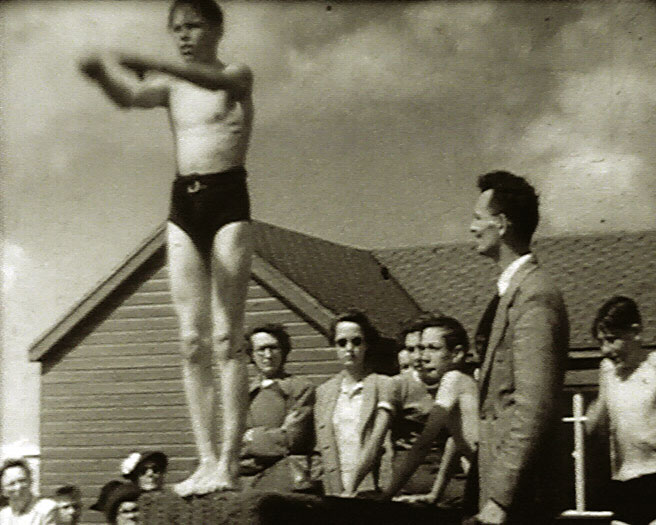 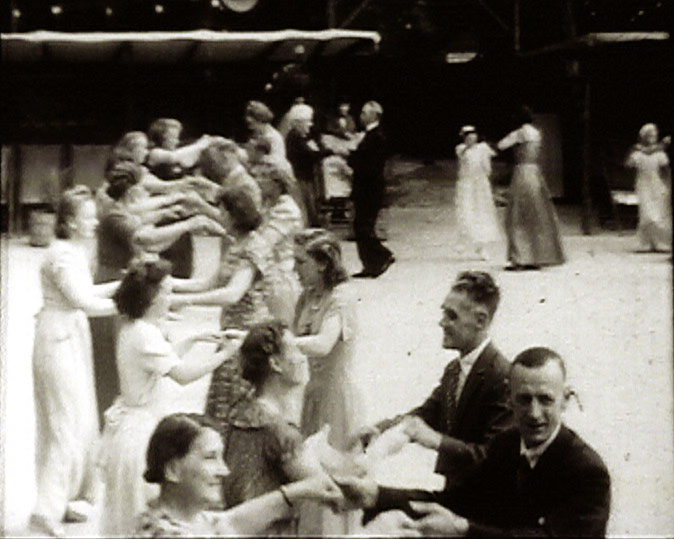 The film begins with a parade through the streets. The Council Chairman takes the salute. The procession includes a marching band, Scouts, military, St John Ambulance, Girl Guides, nurses and Brownies. The procession makes its way to All Saints Church where a guard of honour of Scouts, Guides and Brownies stand outside with Union Jack flags and their ‘troop’ flags.

“Empire Youth Sunday” is led by their marching band, the Sea Cadets along the street; the boys followed by the girls. Scenes of sporting events show a football match between Whitstable and Chatham, scenes on a very busy bowling green, a cricket match, swimming races and diving at an outdoor swimming pool. A newspaper headline declares: ‘Natives of Whitstable Live Longer’.

A close-up of an invitation for an outing to Hastings and Polegate is followed by shots of elderly people taking a coach trip. A shot of a cow in a field is accompanied by a jokey caption and a shot of a butcher’s shop. Children dance in a playground. Couples, many in formal evening wear, dance at the Castle Pleasure Garden. Pairs of young girls dance, one of them presents a bouquet of flowers to a woman and the dancing continues. A small crowd gathers at Chestfield Cricket Ground for the opening of the Swalecliffe and Chestfield fete. Proceedings are led by Lord Teynham. Several of the stalls and sideshows are shown. The Mayor inspects members of the St John Ambulance, then takes the salute as they march past. Scenes of yachting and the regatta follow. Yachts set sail in the harbour. Water sports and games take place in the shallower water. Crowds watch from the beach. There is a brief shot of some fireworks.

“Whitstable Festival Week” The Mayor and Mayoress open the proceedings, followed by scenes inside an exhibition displaying artefacts, models and paintings. Outside, a children’s fancy dress competition takes place and carnival floats gather for the start of a parade. Shots of the participants in costume and their floats follow. The procession makes its way through the streets. Floats include the Carnival Queen, a Whitstable Oyster Company float, decorated prams, people on horseback, a windmill, a wedding cake float and many more. Crowds greet the procession’s arrival in a park.

Guests of honour and dignitaries give speeches from a platform at the Cripplegate Annual Grand Fete. Girl-pipers march through the grounds and others perform a Scottish dance. There is a general view of the fete. A close-up of a newspaper article and a Bible precede a shot of the Sea Cadets’ band, members of St John Ambulance and nurses parading along the street and entering a church.

The ‘Whitstable Old People’s Welfare Committee Garden Party’ takes place at the Castle Pleasure Garden. Elderly people arrive at the Pleasure Garden. There are shots of them sitting in deckchairs, watching young girls perform a dance. Women bring trays of tea and cakes. One man is presented with a large cake. “Prize Winners. Married for 64 years”: a shot of the happy couple. Planes taking part in the South Coast Air Race fly past over the coast. A Festival of Britain poster advertises ‘The Churches Rally’. A few scenes urging people to volunteer for youth work and Bible classes inside the exhibition bring the film to a close. 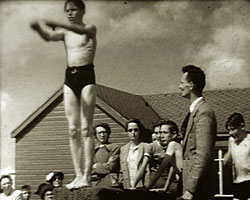 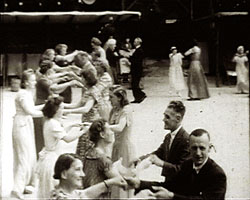 The celebrations featured in this film are typical of the Festival of Britain events held in towns and villages nationwide. Most towns held week-long festivities which included carnival processions and sporting events.

The town of Whitstable still holds the regatta and a carnival in the summer.

Screen Archive South East holds another film about Whitstable by John and Leslie Grimsdale, a colour film entitled Round and About Whitstable (1957 - 1958).

The Museum of London has a collection of photographs, objects and documents relating to the Festival of Britain. The site also collects and publishes people’s memories of the Festival.
http://www.museumoflondon.org.uk/

The Whitstable Times, dating back to 1864, is available on microfilm at Whitstable Library.

The National Archives showcase site includes information and images about the Festival of Britain.
https://images.nationalarchives.gov.uk/assetbank-nationalarchives/action/browseItems?categoryId=69&categoryTypeId=1&allCats=0

An online learning resource containing information and images on the Festival of Britain and Britain's post-war society. Images are from the University of Brighton's Design Archives collections.
http://www.vads.ac.uk/learning/designingbritain/html/festival.html