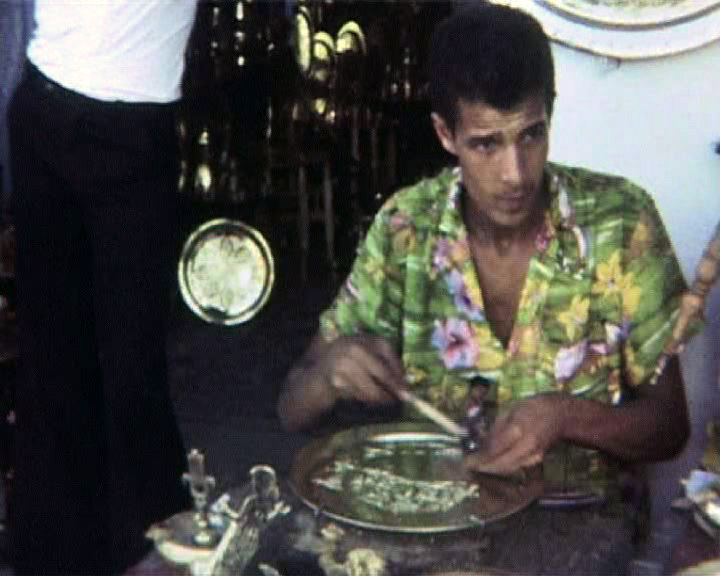 The film opens with exterior shots of the hotel where Peter and Mary Williams are staying. Mary is seen seated in a swing seat writing postcards, and in a courtyard having tea. There are several shots of Mary amongst a tour group with a guide, and scenes of a busy pedestrian street. Mary Williams is wearing a white sun dress and straw hat. There are stalls in the street selling rugs. Peter Williams is seen wearing swimming shorts and a hat, walking from the hotel corridor, through the garden to the hotel pool, with the sea visible in the background. Mary stands by a large thermometer mounted on the wall and points to the temperature at 30 degrees centigrade. There are scenes of a sandy beach, where a Tunisian man rides a donkey through the surf. Peter lies on a sun bed, and Mary strokes the nose of a camel sitting on the sand. There are further shots of stalls selling wicker baskets, metal work and lanterns, with the stall holders also working on producing their wares. A camel is seen hitched to a wooden trailer which is loaded with straw. Donkeys and mules are also being used by local people to carry goods. The film ends with a sign reading 'Nabeul', to denote the town where the couple are staying. 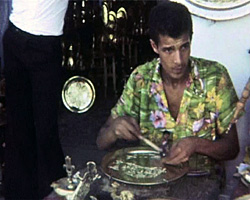