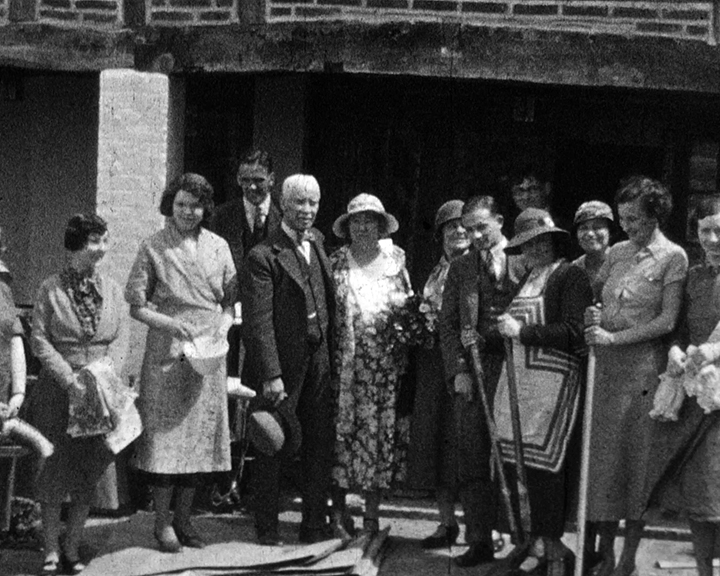 The film opens with a shot of book: "Thatchers, East Horsley, Surrey". The film begins with titles introducing the film - to paraphrase - a short review showing the creation of "Thatchers", including a list of the many contractors who worked on the building. Thatchers was built as a tea house known as 'Thatchers Old World Tea House'.

The site is seen being cleared by workman, they set out the building and dig the footings for the foundations. Various trades can be seen operating on the site; men prepare timbers for the building, whilst others mix cement; they are all using hand tools. A man is seen splitting a large log using a mallet and other hand tools, elsewhere on site men shift soil using wheelbarrows. The brick walls begin to go up, bricks are moved around the site using hods. As the walls are built higher, scaffolding is erected around the building. Various tradesman are seen hard at work and eventually the roof trusses appear and reeds lay stacked up on the ground ready to be used as thatch on the roof. The thatchers get to work laying the reeds on the roof. The finished roof is seen as the thatcher makes some final adjustments on the ridge of the roof. Dark shots of tradesman follow, they are now working on the interior of the building. Glass is seen in the windows.

A man is seen walking down the driveway as work is underway on the landscaping outside the building. A long driveway wends its way up to the house and plants can be seen in the front garden. Two men roller the newly laid lawn. A young man arrives on the site carrying a basket full of bottles. The workman on site are then seen drinking bottles of 'Watney's Pale Ale' to celebrate the completion of the building. A steamroller is used to flatten out the car parking area, and ladies with brooms are seen standing in the doorway of the building. Various close-ups of woman and young girls gesturing to the camera. A large group of people gather at the entrance, the film then cuts to horses and riders passing by near to the house.

Tea cups and plates and are seen laid out on a section of a tree trunk fashioned into a table in the garden. People sit on a carriage on the driveway and wave to the camera. They all then line up and pose for the camera, most are wearing aprons. In the kitchen, cooks are seen preparing food and in the garden people sit at tables and are waited on by the waitresses. Shots of an elderly couple arriving and the cashier working at the till. People buy bunches of flowers from a lady standing at the entrance as they leave.

The early history of Thatchers Old World Tea House is recorded in an article written by the film-maker's daughter held on file at Screen Archive South East. The article featured in Horsley village magazine in 1989.

Thatchers Old World Tea House (Jan - May 1934) was filmed by Kennith Chown, whose father, Frank, was the architect responsible for designing the Tudor style building. Construction work started on the 3 January 1934 and was finished and open for business on 19 May 1934. The film shows the various contractors onsite who were responsible for the different aspects of the building work (a list of all the contractors appears in the article). Once opened, Thatchers was successful in drawing in custom from as far away as London. Numerous patrons are seen taking afternoon tea in the gardens in the latter section of the film, these according to the article, were priced at 1/6d per person and were popular especially at weekends.

By the end of the century, Thatchers was still trading, but had grown considerably from its origins as a tea house. Today Thatchers is a resort hotel, owned and run by a major hotel chain.

[In and around East Horsley] (1931 - 1934) was filmed by Kenneth D. Chown around the time of the opening of Thatchers Old World Tea House. It features numerous scenes of the Chown family at home in East Horsley and on holidays in southern England.

An article from Hosley village magazine entitled "Thatchers Tea House" written by Susan Little (nee Chown) and published in 1989, is available in the Screen Archive South East accession files. It provides a detailed account of the early history of Thatchers, as well as highlighting the various building techniques, materials, and fixtures and fittings that were used.