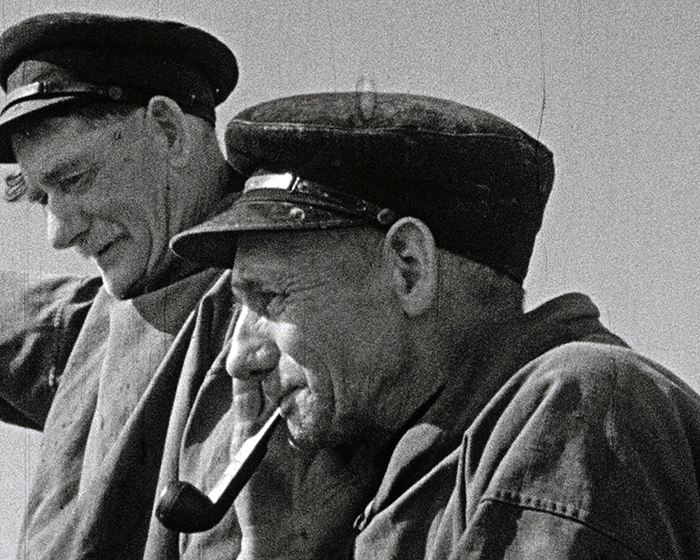 Sonny Hanson and R P Cue's film opens with a composer at his piano. The story shows a naval officer with his wife at a station. His train passes a church, which starts a flashback to his own wedding. The couple are later seen with their small child. Storms at sea with high waves cause a shipwreck and the officer is seen swimming for his life. A lifeboat is launched and the wife is shown at home crying. She then receives a telegram with good news after which the couple are seen back in church. The film ends with the composer writing Finis.

Ashford resident 'Sonny' Hanson was a keen and creative amateur film-maker who began his hobby in the 1930s. A member of the Ashford Film Society, 'Sonny' collaborated on a large number of mostly fictional productions. His experiments in special effects like the model shipwreck seen in this film, suggest that Sonny Hanson was a skilled and imaginative amateur film-maker. As the titles suggest, this film was originally accompanied by a soundtrack, 'London Fantasia' written by Clive Richardson. It is extremely likely that Richardson is the composer seen at the piano throughout the film, though, unfortunately, the original soundtrack that came with the film has been lost. A replacement has been added for the online version.

The RNLI Lifeboat 'Charles Cooper Henderson' was the Dungeness Lifeboat. Crewed by the Royal Navy, it took part in the Dunkirk evacuations in 1940.
https://www.dungenesslifeboat.org.uk/dungeness/history
https://www.nationalhistoricships.org.uk/register/421/charles-cooper-henderson