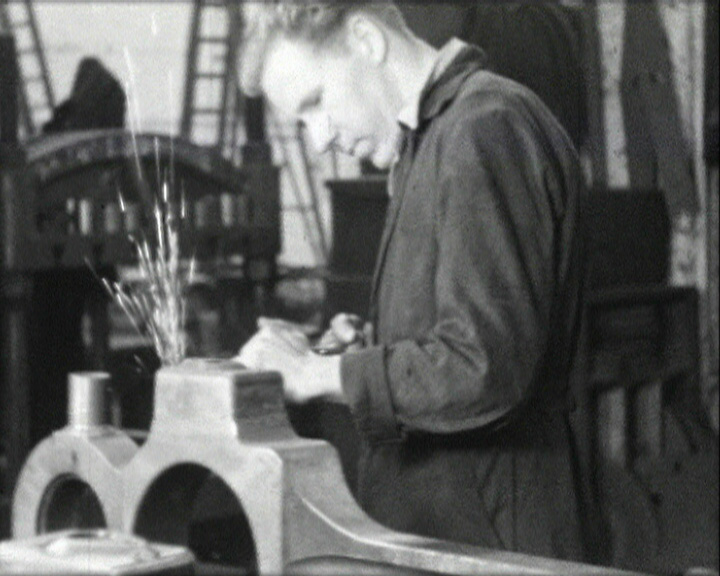 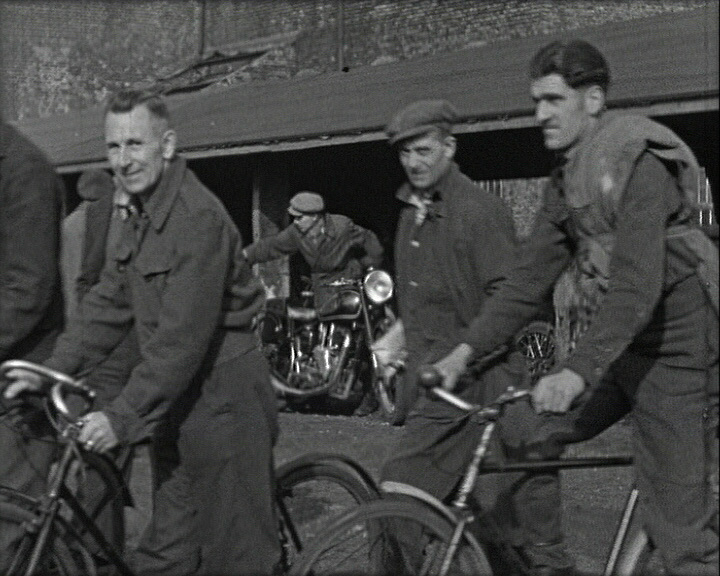 Workers create rods for the driving wheels of steam locomotives at the Ashford Railway Works - a slab of heated steel is molded by hand and by machinery into the required shape. At the end of the working day the male workers leave the factory by foot, bicycle and motorcycle - a few of the men hand dockets to a waiting supervisor. The next section of the film focuses on one of the workers, following him from the factory to the beach at Dungeness where he goes shore fishing - he later rewards his efforts with a drink at The Pilot Inn. Back in Ashford sheep are herded onto freight trains from the pens on the sidings and onto a two-tiered lorry parked in a field. Later, the sheep, along with cattle and pigs, are unloaded from vehicles into the pens at the Ashford Cattle Market - an auctioneer from 'W & B Hobbs Auctioneers' oversees the sale of the animals to the agricultural community. Elsewhere, the local community enjoy a different type of market - men, women and children explore the wares on offer at the food and clothing stalls. Sheep are sheared with electric clippers and the wool is delivered via lorry to 'Gregory & Prentis' wool staplers in Milton. Out in the fields women sow potatoes and horse-drawn ploughs work the land. In the hopfields workers prepare the trellis for the hops - one man stands on stilts to reach the overhead support. The hop workers (mainly women and a few young children) pose for the camera whilst stopping for tea. A woman picks cherries bound for London's Borough Market. Members of a hunt gather outside a pub - the landlord supplies them with brandy before they set off with the hounds - one middle-aged woman is filmed mounting her horse to ride sidesaddle. In the woods men labour to fell huge beech (?) trees, using saws, axes, sledge hammers and wedges. The trunks of the felled tress provide the workers with a seat when they break from their labours for refreshment. 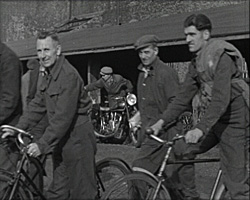 Ashford resident 'Sonny' Hanson was a keen amateur film-maker who started making films in the 1930s. As a member of The Ashford Association Film Society he worked on various group projects - they were predominantly works of fiction. The narrative-driven film-making style of fictional film-making is evident in [Ashford Railway Works: Local Industries and Farming] (ca. 1947) when a railway worker is followed on a fishing trip - the action appears to have been tightly scripted and edited. The rest of the film is concerned with documenting the industries and workers connected with Ashford. As such therefore, [Ashford Railway Works: Local Industries and Farming] (ca. 1947) offers a fascinating and well-shot record of the Ashford's varied workforce in the immediate post-war era.

Screen Archive South East holds numerous other films with which 'Sonny' Hanson was attached. In The Ashford Carnival and Shopping Week (1949) he captures the local community at leisure, and in Watery Trail. River Medway (1938) he traverses The Medway River, filming the industries lining its banks. 'Sonny' Hanson was also the script writer and cameraman for various fictional films produced by The Ashford Association Film Society including Mrs Newlywed's First Dinner (1940s) and Cinderella. A New Version of An Old Story (late 1940s).

Screen Archive South East also houses films which cover subjects similar to those filmed in [Ashford Railway Works: Local Industries and Farming] (ca.1947). For example, In England's Garden (1930s) and Hop Fields of Kent (ca. 1937) look at agriculture in Kent. Sevenoaks Cattle Market (1999) charts the growth and demise of a town's cattle market, and [Steam Engines & Train Transport in the South East] (1964; 1966) records the railways of the South East.

This book looks at the work of the Ashford Cattle Market Co. Copies of the book are available at Ashford Library and The Kent History and Library Centre.

"On view are photographs of old Ashford, Ashford at War, local archaeological and geological discoveries, artifacts from an old established Ashford pharmacy plus exhibits of every day life."
http://www.ashfordmuseum.org.uk/

Ashford Library Railway Collection is "a specialist resource providing material relating to the railways of Kent." The collection includes 4,000 books, 2,500 photographs, periodicals and timetables, and other items of relevance to Ashford Railway Works. A full list of resources and research material is available from the Transport Trust website.
http://www.transporttrust.com/10034.html

The Museum of English Rural Life at the University of Reading houses collections include archives, photographs and objects relating to ploughing, harvesting and hop picking in the 1930s. The Museum’s database is searchable online.
http://www.reading.ac.uk/merl/

"The sights, sounds and smells of country life in Kent over the last 150 years."
http://www.kentlife.org.uk/