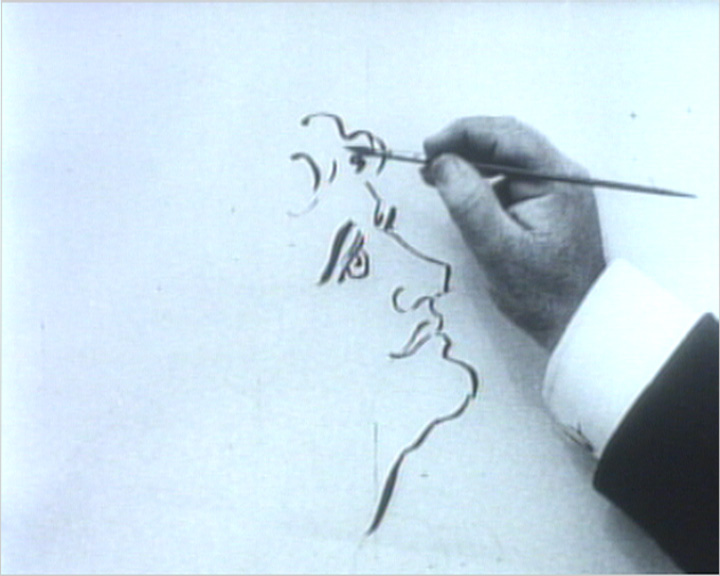 Long shots capture Harry Furniss at notable landmarks in Winchelsea - he is seen at The Pipewell Gate and New Gate, the New Inn Hotel, the ash tree under which John Wesley gave his last open-air sermon, Ellen Terry's home Tower Cottage and The Grey Friars. Using paint and ink he creates images of the above locations and of the prominent Winchelsea residents Ellen Terry and The Weston Brothers. He is also filmed observing young girls learning their trade outside the Winchelsea Lace School (known today as 'The Little Shop') - one close-shot shows two of the students working with bobbins on cushions. Harry Furniss then relocates to Hastings where he wanders amongst the ruins of Hastings Castle and visits St Clements Church and The Smugglers Caves. The film ends with images of the fishing area of Hastings Old Town.

It is highly probable that Winchelsea and its Surroundings. A Day with Harry Furniss and his Sketchbook (ca. 1920) was a Furniss Films production. Harry Furniss was a prolific satirist during the Victorian and Edwardian era, writing and providing illustrations for 'Punch' and 'Illustrated London News'. He also illustrated the novels of Charles Dickens and William Makepeace Thackeray. In the early 1910s his burgeoning interest in cinema led him to move to New York, where he worked for the Thomas Edison Company as a writer and actor. Upon his return to England in ca.1914 he built a film studio at Hastings, making films such as Peace and War Pencillings (1914) under the company name Furniss Films. The defining feature of many of the Furniss Films productions was the combination of live action and speeded-up motion sketch animation, reflecting upon Harry Furniss' twin interests. This is evident in Winchelsea and its Surroundings. A Day with Harry Furniss and his Sketchbook (ca. 1920) where he tours the ancient West Sussex town of Winchelsea, capturing its significant locales on celluloid and in ink. It is also interesting to note the prominence of Harry Furniss himself in the film - his presence in every scene implies a level of 'celebrity', one which was no doubt exploited to attract a cinema audience.

Screen Archive South East holds several other films which have recorded Winchelsea and its surrounding area. These include [Local News Film, Hastings] [1913 - 1925].

Copies of this book are available at Hastings Library and The Centre for the Study of Cartoons and Caricature.

A copy of this book of humourous prose is available at Hastings Library.

Furniss, Harry. How to Draw in Pen and Ink. London: Chapman and Hall, 1923

A copy of this book is available at The Centre for the Study of Cartoons and Caricature.

Furniss, Harry. Our Lady Cinema. How and Why I Went into the Photo-play World and What I Found There. Bristol: J.W. Arrowsmith, 1914

Harry Furniss recalls and illustrates his experiences with Thomas Edison in the silent cinema. Copies of the book are available at The British Library and the BFI Library.

The British Cartoon Archive is located in Canterbury at the University of Kent’s Templeman Library. It has a library, archive, and exhibition gallery, and is dedicated to the history of British cartooning over the last two hundred years.
http://www.cartoons.ac.uk/

"The Hastings Museum and Art Gallery contains a rich mixture of displays relating to local themes and the culture of other lands."
http://www.hmag.org.uk/

Hastings Library has the largest local studies collection in East Sussex. It includes books, maps, press cuttings and other material relating to the local area.
http://www.eastsussex.gov.uk/leisureandtourism/localandfamilyhistory/libraries/largecollections.htm

"The National Portrait Gallery was founded in 1856 to collect the likenesses of famous British men and women". The collection, which is searchable online, includes a large number of works by Harry Furniss.
http://www.npg.org.uk/index.php

"Punch, the magazine of humour and satire, ran from 1841 until its closure in 2002...Punch Cartoon Library [is] the world’s best and largest repository of cartoon art available for licensing." The Punch magazine archive is now owned by The British Library.
http://www.punch.co.uk/

Displays in the Winchelsea Court Hall Museum, "illustrate the history of the Ancient Town, since it was built by Edward I as a medieval "New Town" over 700 years ago, and about Winchelsea's position as Head Port of the Confederation of Cinque Ports...Exhibits include maps, models, pictures, seals, local pottery and items of daily life from the area."
http://www.winchelsea.com/museum.html

This film by Harry Furniss documents the fishing industry in Hastings Old Town. The film is held at BFI National Archive - Screen Archive South East also holds a copy of the film which is available for viewing.
http://www.bfi.org.uk/archive-collections

In this film Harry Furniss is filmed creating caricatures of World War I armed forces. he film is held at BFI National Archive - Screen Archive South East also holds a copy of the film which is available for viewing.
http://www.bfi.org.uk/archive-collections

This is an online guide to Hastings and St Leonards which includes information on local history and a number of archive photographs.
http://www.1066online.com/hastings.htm