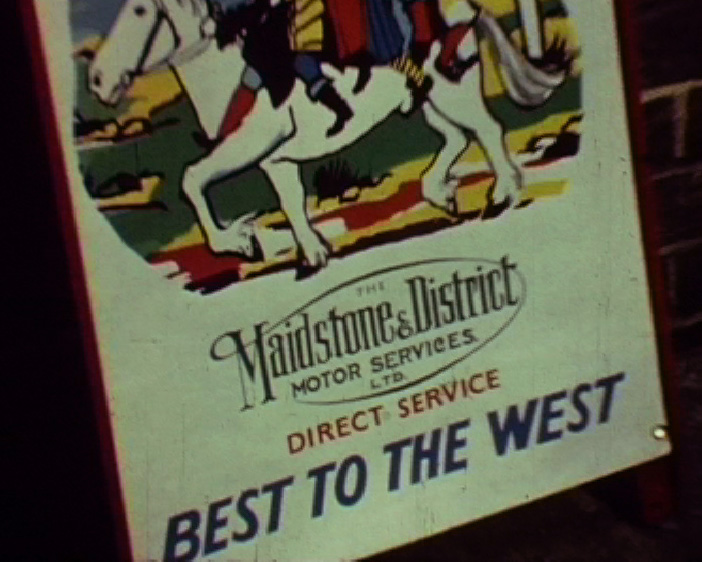 Opening titles: "East Kent presents" and "Wheels over Britain", followed by credits and fanfare. The film opens with shots of an old-fashioned stagecoach travelling through the countryside. It arrives at a coaching inn and its passengers disembark. The narrator describes how this was once the only means of travel throughout Britain. Still of a map of Britain with road networks marked on it. Shots of Stonehenge, accompanied by a narrative about how the road network has grown from ancient tracks linking such sites and how the wheel has dominated forms of transport. Shots of a sledge being used to transport goods to houses on a steep street at Clovelly in Devon, followed by a close-up of a coach wheel turning on the road. Shots of Victoria Coach Station in London, coaches are seen coming and going and internal shots show the canteen where people are seen eating and drinking at tables. At an inquiry desk a woman picks up a 'Southdown' coaches brochure. Elsewhere, there are shots of a coach station as the narrator explains how new coach stations are being built to keep up with the pace and demand of coach travel. A 'Hebble' coach is seen leaving a depot. Still of map showing the southeast of England, followed by shots of Canterbury Cathedral and a hop garden with pickers working. Map of southern England, followed by shots of HMS Victory at Portsmouth and New Forest ponies. The film features more regional maps and scenes from across Britain that would be 'enjoyed' on a coach journey. Shots of a hand turning the page of the "ABC Coach Guide for Great Britain" timetable, the narrator explains how simple it is to travel by coach. Shots onboard a coach of a passenger reclining in his chair, a man serving drinks and a sunroof being opened. Sign: "Dover Marine"; an 'East Kent' coach boards a ferry at Dover for the crossing to Ostend, followed by a shot of the 'East Kent Europabus International Coach Services' brochure.

The film cuts to shots of a coach party at the seaside and other destinations, including London. The film continues to feature other destinations, events and landmarks across Britain, emphasising coach, sea and air links and combined tours involving boat and steam railway trips. The film goes on to promote coach tours to sporting events, featuring a cup final at Wembley Stadium in London, motor racing and horse racing. A cricket team are seen using a coach to reach where they are playing a match. The coach is promoted as a modern and economical way of escaping urban surroundings. The narrator continues to explain about coach holidays and the effort that goes into choosing high quality hotels for the coach holiday, the narrative is accompanied by scenes of holidaymakers using one such hotel on route. The narrator goes onto to talk about the skills of drivers and couriers and how with their help continental coach tours are made easy and pleasant. Sign: "Dover Harbour Board 1606", shots of coaches boarding ferries at Dover and the ferry sailing out of the harbour entrance. The film ends with shots of the 'East Kent' bus station at Folkestone, Dover beach and seafront and an 'East Kent' coach with passengers on board. Title: "End". 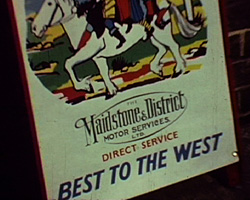 Like many of the films in the collection, Wheels Over Britain (1956) was adapted for use by East Kent Road Car Company. The accession files held by Screen Archive South East contains two articles relating to this film from the Maidstone & District Bus Co. staff magazine 'Inside Only' entitled "Traffic Notes" and "M&D Film Publicity: Wheels Over Britain".

Both describe the film in some detail, outlining its content as well as who made the film and for what purpose, to whom it might be of interest to and how to request a viewing copy to show interested groups and organisations.

"Though the purpose of the shows is to "spread the gospel" of coach travel - to advertise, in fact - such is the quality of the films shown that they are real entertainment. There is no blatant advertising and "Wheels Over Britain", for instance, relies on a more subtle approach to get audiences into the frame of mind in which, attracted by the diversity of resorts and beauty spots served by coach they discover how easy and pleasant it is to get there by that means". (Inside Only, 1957).

Screen Archive South East holds a number of professionally made films promoting coach travel during the 1960s and 70s that were used by both the East Kent Road Car Company and Maidstone and District Motor Services in screenings to potential customers. The best of these include Express Coaches Everywhere (ca. 1968), The Canterbury Day Tour (ca. 1961), South Coast Resorts (ca. 1971), Its only a coach ride away (ca.1967) and Coach Wise in Britain (ca. 1964).

The stated aim of the M&D website is to cater for those interested in the vehicles and general operations of bus operators in Kent and parts of East Sussex. The site includes articles and photographs relating to the history of former bus operators, including Maidstone & District and East Kent.
http://www.mdekbusclub.org/

Two articles, dated 1956 and 1957 from 'Inside Only' - the staff magazine of Maidstone and District Bus Co. which give interesting background information specifically relating to 'Wheels Over Britain'.