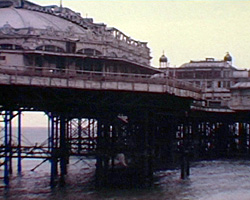 The compilation opens with a series of shots showing the West Pier at Brighton, filmed at dusk from the beach. The iron framework reaches up above the still water, in a state of disrepair cut off from the beach. A montage of shots include: the front of The Grand Hotel; panoramas of Brighton Seafront taken from the Palace Pier; a young woman in a white T-shirt sitting above a tank of water on the "American Dunker" amusement on Palace Pier. A man to throws balls at a target to tip the woman into the water tank.
A panoramic view shows the Volk's Electric Railway train on the seafront as it moves along the beach towards the Peter Pan Playground from Palace Pier and the Aquarium along Madeira Drive. Crowds of people gather on Madeira Drive, seen from high on the promenade, to watch a military marching band parading on the street.