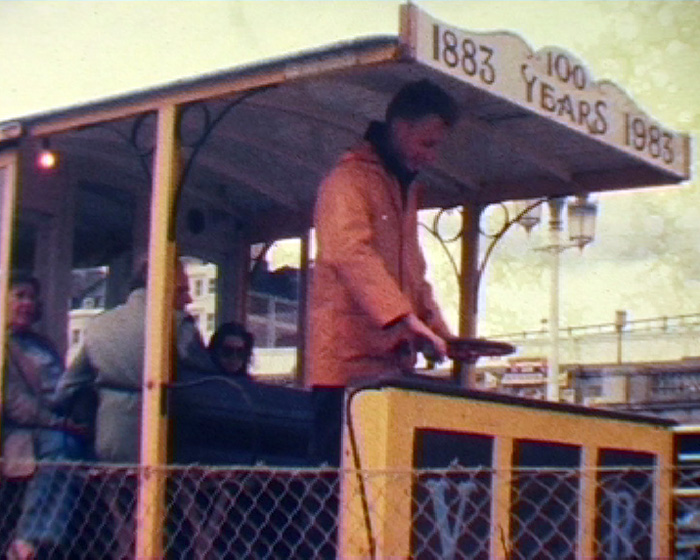 An eleven minute documentary on the Volk's Electric Railway that includes views of several electric cars, shots on and around the line from vantage points at the Marina (Black Rock) and Madeira Drive, the sheds and passing loops, accompanied by a full voiceover narrative.

Commentary begins over the title "Volk's Electric Railway" - 'This is the story of a little electric railway, built by a Brighton man with undaunted enthusiasm, sometimes despite great adversity. Magnus Volk, the son of a clock maker, was born in Brighton in 1851, and from an early age was interested in things mechanical. His father died when he was 17, Magnus took over and ran the family workshop, so having the opportunity to invent things. At 20 years of age, Magnus invented a telegraph, and also tested his electric shocking coil on strong girl volunteers gauging it success by the amount it made them jump"

Pictures show a Volk's Railway train moves slowly along the beach at East Brighton, sound recorded at the scene is also included. Music plays over the commentary. The railway line is seen from the Palace Pier. Madeira Drive and Kemptown Seafront are seen above.

Commentary: "He equipped his house with the first electric light system in Brighton and in 1883 installed electric light in the Royal Pavilion. Amongst other things an electric dog cart for the Sultan of Constantinople, probably the first export order made for the motorcar, X-Ray equipment for Brighton Hospital, and an egg cup for one-armed soldiers followed". Pictures show amusements at the beach, including a big wheel and slide. The Marina and large cranes are in view behind.

Commentary: "Also in 1883 he designed and built Volk's Railway, the first electric public railway in Britain. At first it only ran from the Aquarium to the old Chain Pier, some quarter of a mile further east, later being being extended to the Banjo groyne at Paston Place and finally along Madeira Drive to Black Rock (now the Marina), a distance of one and a quarter miles. Pictures show a Volk's railway train (electric car) running at dusk, silhouetted against a pink sky, with the driver standing at the front.

Passengers get onto the 'electric car' at the Aquarium Station. The driver turns to check everyone has climbed on before driving forward. The cars were built between 1892 and 1926 and are used according to weather conditions, Suter informs [audio damage at start].

A sign at a pedestrian crossing, one of thirteen giving access to the beach, reads "Red Beware: Train Approaches". A car moves towards the camera, cutting to footage taken from the front of a moving car. The commentary continues as the train approaches a "passing loop". The front of the car reads '100 Years: 1883 - 1983' as it moves towards the camera. The driver wears an orange waterproof coat, prepared for all weather conditions while working on the open sided cars.

A moving pattern defines the next part of the film - a trip down to the Marina. Commentary: "Next stop Peter Pan's Playground". The narrative explains that the electric lift, adjacent to the playground was also built by Volk. A sign details prices for single adult and child fares between the Marina and Undercliff Walk and the Aquarium and Palace Pier.

The cars pass through another passing loop, before passing through the Paston Place sheds, where the cars are stored and repaired. Commentary continues; ' Now coming up to the Nudist Beach, wonder what we'll see. Yes! One solitary male figure standing up!'.

The car arrives at Marina Station, '...built in 1937, the year Magnus Volk died. The original was at Black Rock, a little further East, but the line was shortened slightly to allow for a bathing pool." A disused bay is seen. The yellow cabinet, containing nearly all the controls, being shown in close up. Suter describes how the train is operated: "For the technically minded"... using a "dead mans handle" with weights of each cars in Tons, the model and type of motors used and the working volage of 145 volts Direct Current (DC). "The track guage is 2 feet 8 and a half inches".

The return journey is taken, passing the Banjo pedestrian crossing, where visitors cross to reach the beach, and back through Paston Place sheds, to Peter Pan's Playground "to have a look around". The Regency architecture of Kemptown, above the promenade, is shown in footage of the railway line taken from the beach. Footage from this elevated vantage point follows, as a Volk's car passes along the track below.

A yellow wooden building, flush with the side of the cliff, "supplies the rectified current to the live rails and houses the workshops and office" for the Volk's Railway, seen in several views. Suter explains that the original Paston Place sheds were blown down in the storm of 1896, which also destroyed the Chain Pier at Brighton. 'Magnus Volk certainly had his problems in the early days" he says. The film closes mid-shot following views of the site of the old viaduct, where the line went to sea, being passed over by a car, the commentary says: "where passengers received quite a thrill and very often quite a wetting when the sea was at all rough." 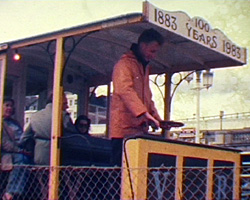 Suter favoured Brighton Seafront as a subject, filming extensively on the promenade, at the West Pier, and along Volk's Electric Railway. He also took a substantial amount of footage at Amberley Museum in West Sussex, and the Bluebell and Midhurst Railway lines in East and West Sussex. He produced enough material and spoken commentary to make an hour long documentary about Amberley Museum. This material is catalogued under [Amberley Museum Part One] and [Amberly Museum Part Two]. B. C. Suter, of Petersfield, West Sussex, developed a strong interest in films and local history in the 1950s and 1960s, before taking up the hobby with enthusiasm in retirement.

Website of the association, established in 1997, detailing the history of Magnus Volk's railway, opened in 1883, with images and text.
http://volkselectricrailway.co.uk/