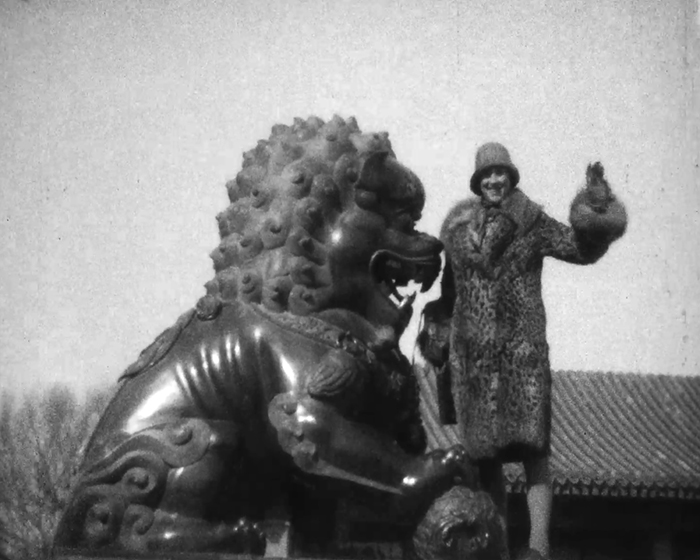 This black and white film starts with a bear in chains being made to perform tricks in a Chinese park. Mr & Mrs Simpson visit the Summer Palace in Peking and enjoy a meal in a traditional Chinese restaurant. The film ends with a shot of a printed advert for the Bradford Dyers Association on a billboard.

This film opens with a brown bear in chains being made to perform tricks for the watching public in a park. This is followed by shots of camels parading past a walled building, views of Peking Summer Palace, Longevity Hill and Kunming Lake. Mrs Simpson poses for the camera in front of the Old Palace, followed by shots of the roof-line, pagodas and traditional buildings on the lake.

In the next scene, Mr & Mrs Simpson film each other eating a traditional Chinese meal with chopsticks in a restaurant. Traditional bamboo artwork can be seen on the wall behind them. The film returns to Mrs Simpson dressed in a fur coat, standing on a statue of a stone dragon waving at the camera with her handkerchief.

The next sequence shows a group of young Chinese boys and men in a courtyard. Several dark shots lead into the next film, which opens with the Simpsons and another younger man (?) playing a game (?) outside a building and later the group are pretending to receive gifts (a plant in a pot ?) at a fake award ceremony in a courtyard, repeatedly bowing at each other in traditional Chinese custom, as they offer and accept the gift.

The film ends on a close up of a sign written in Chinese Mandarin Baihua script, advertising fabric (Black Wool, Venetian) dyed by the BDA.