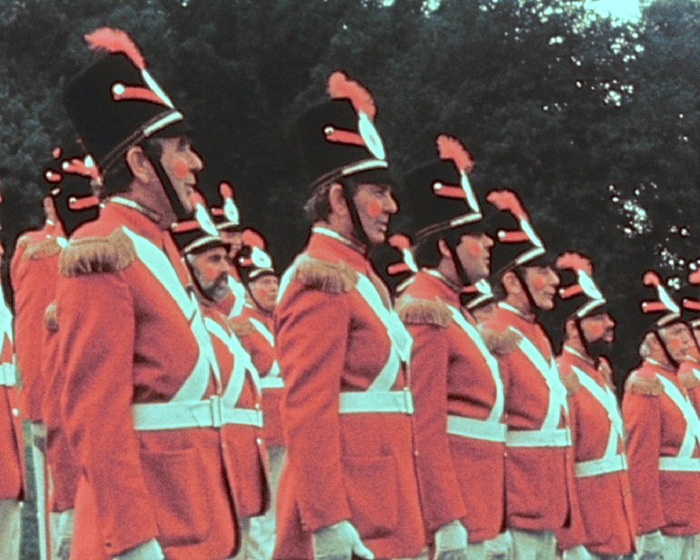 The film opens with shots of the town centre, including C&A and McDonald's; the narrator introduces the film by highlighting that although some people in the past have described Crawley as a "cultural desert", there is more to the town than just the commercial life. Other shots of retail outlets and leisure facilities follow, as the narrator explains that without a dedicated arts centre, other venues, including shops and church halls, have had been found to host cultural groups and exhibitions. Shots of the Crawley Accordion Band playing music, followed by heavy plant machinery preparing the ground for a leisure facility, including the new arts centre in the Hawth area of the town. The steel structure of the building is seen being assembled. Music plays, as the narrator continues to explain the progress of the building. Shot of an artists impression of the building: "Crawley's New Theatre/Arts Centre, Opening Spring 1988". The narrator adds that this would be another "milestone for Crawley", followed by the title: "a Milestone for Crawley".

The next section opens with shots of the Operatic Society rehearsing whilst the narrator explains the history of the group. At Tilgate Forest Recreation Centre members of the society are seen building stage sets. The building of the new arts centre will mean that the society no longer have to operate in this way. The voice of Cllr Jim Smith is heard as he gives a history of the centre, which has been home to many groups in the town. The Crawley Camera Club who meet in the centre are seen taking photographs of fashion models and developing photos in the dark room; shots of their work on display at the Friary Hall. The narrator explains about Crawley Art Society, some of the members are seen at Nutley windmill painting pictures of the mill. The voices of some of them are heard expressing their desire to have their own art studio at the new arts centre. Church bells are heard pealing, followed by the sound of the Weald Choral Society singing and shots of a temporary platform being built inside St Mary's church. The singers are seen practicing briefly, before the film cuts to shots of the Crawley Ladies Harmony Barbershop Club singing; the narrator explains the background to the group.

Shots of Crawley's town festival, with performers and the Town Crier speaking to the crowds. The narrator explains about the festival and how it became an important focus for the arts. The New City Jazz Men play at the bandstand; one of their members explains his hopes for the new arts centre. A group of African drummers and dancers are seen performing, the leader of the group explains about the group and how they split their life between the UK and Ghana. This section concludes with a description of the wider 'African Sanctus' performance, alongside shots of African countryside scenes and the choir singing.

The film cuts back to the construction site of the new arts centre; the narrator describes the intended layout of the center. Members of Crawley Film Unit are seen with camera equipment; the narrator explains that the group's members have been recording the building progress of the arts centre and highlights their other work. Shots of some of their productions follow, including documentary footage of the early stages of the new town, newsreel footage of the investiture of the first Mayor of Crawley, Mrs Hepzibah Carmen and footage of the Queen's visit to the town in 1958. A founder member of the Barbershop Harmony Club begins to talk about the club and the history of that type of singing alongside shots of a Crawley Film Unit production of the 'Crawley Chordsmen' at Goffs Park.

Shots of composer, Phil Baker and writer Thelma Hedley working on an original musical production of 'Gulliver'; the narrator states that after 7 years the work was nearing completion and so was the new arts centre. Shots of cartoons depicting the story of the musical as a voice narrates the story. The film cuts back to the arts centre being built, whilst the narrator describes the progress of its construction. Title: "Tilgate Forest, The night of October 15/16th 1987"; voices read poems about the hurricane of 1987 alongside shots of the devastation wrought upon the park. The narrator describes how many of the old huts of the recreation centre were destroyed, but that plans were underway to replace the huts with new log cabins. Cllr Jim Smith talks about this development, alongside shots of the new cabins.

Shots of the Isfield Barn Theatre, the narrator describes how it was the only purpose built theatre in Crawley for many years. Documentary footage of the conversion of the old barn into the new theatre, followed by actors performing a modern interpretation of The Canterbury Tales. A member of the theatre group describes how they envisage working alongside the new theatre. The narrator states the new arts centre is finished. The marching band, 'Masquerade' practices on one of the centre's new car parks, the arts centre can be seen in the background. Shots from the opening of the new arts centre in May 1988 with members of the public arriving to look around. A film cameraman is interviewed on his thoughts about the new centre. He expresses his concerns about the design of the building. An elderly couple who were once members of the Crawley Drama Group are interviewed next. They reminisce about old times and believe the new generation are very lucky to have such a facility. Shot of a poster advertising 'Hello Dolly', the first show to be staged at the hall, alongside shots of the inside of the theatre before and during the production, including backstage scenes and interviews with some of the cast. The film ends with the reciting of a poem. [End credits].