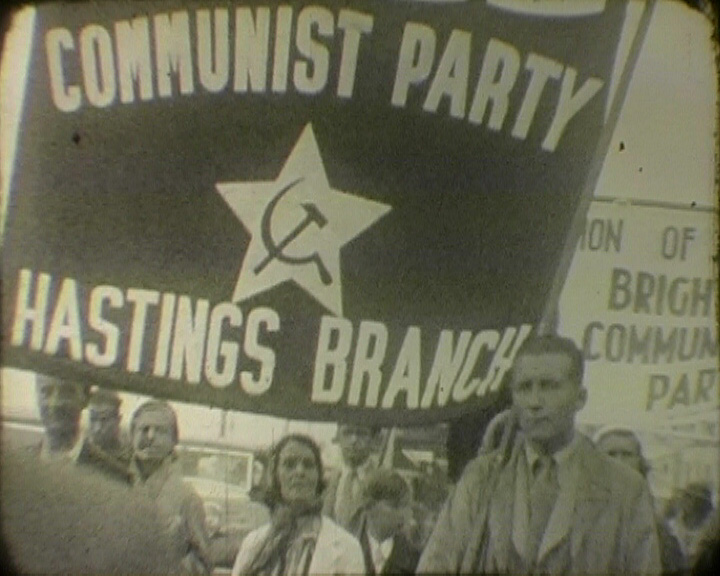 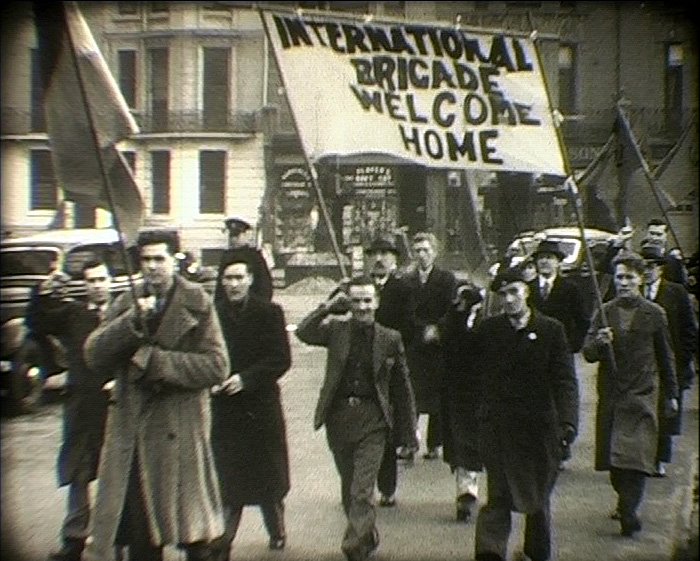 The film opens with the title ‘People’s Newsreel Presents’ 'Sussex People's Scrapbook 1938'. a hand turns the pages to reveal events happening throughout the year. The opening scenes show the Sussex People’s March of History on August 7th. Marching along the Brighton seafront, people carry banners with slogans such as ‘Rise Against Taxation’ and ‘Sussex Cooperative Trading Association’. The demonstration congregates at the seafront. A number of speakers address the crowd, including, Joe Matthews, Ted Bramley and Ernie Trory. There is a close-up of a marshal. On November 6th, the 21st Anniversary of the Russian Revolution is celebrated. There are shots of the Daily Worker newspaper headlines and leaflets celebrating the anniversary. A man flicks through the leaflet which shows events planned for the occasion. People had out leaflets on the Brighton streets. A march takes place; people carry flags and a variety of Communist Party banners; many raise their fists in salute. The march continues along the seafront, led by a band of drummers. A number of policemen escort the marchers.

The final entry in the year’s scrapbook shows Brighton men returning from Spain. A crowd gathers outside the railway station, holding flags and a banner which reads ‘International Brigade - Welcome Home’. Another banner reads: ‘Role of Honour. V. Deegan. T. Sheehan. D. MacDonald. Died to Save Democracy'. Three men arrive wearing trenchcoats and berets, the men raise their fists in salute and are greeted by the waiting crowd. They march off through the Brighton streets. At the war memorial they lay wreaths, the intertitle reads: “In Memory of the Brighton & Sussex Men who gave their Lives in Spain that Peace and Democracy may Live ... Salud!”. The march continues through the streets; men, women and children raise their fists at the camera as they pass. [Another version of this film ends with intertitles urging the viewer to join the Communist Party]. 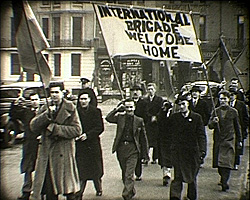 Made to promote and record the Communist Party’s work in Sussex, Ernie Trory recorded these events on film as part of his work as Sussex Communist Party Organiser. In the 1930s The Communist Party was a growing organisation, reaching the peak of its popularity in the 20th Century. The organisation was founded on championing workers rights, rallying against unemployment, promoting the Soviet regime, and fighting against the influence of fascism both in the UK and abroad, including fighting in the Spanish Civil War. Evidence of these activities can be observed through Ernie Trory's self styled 'scrap-book' style filmic review of the regional Party's activities in 1938. The Sussex People’s March of History shows the various local Communist Party rallying and supporting labour issues. Celebrating the anniversary of the Russian Revolution indicates a clear support of the Soviet regime and the return of soldiers from the Spanish Civil War indicates the clear commitment to fighting for the principles they held. Ernie Trory's films capture these key moments in the Party's history and in the social history of the South East.

Another quite different example of a demonstration taking place on the streets of Brighton is the Brighton & Hove Band of Hope Demonstration (ca. 1913) showing a march of members of the Temperance Movement on Brighton's sea front.

"Our aim is to reproduce primary sources in such a way as you would find them in an actual archival repository; not piecemeal, but in their entirety."
http://www.communistpartyarchive.org.uk/

The East Sussex Record Office collections held at The Keep, include papers and publications of Ernie Trory; an organiser of the Communist Party in Sussex, 1938-1998. The online catalogue can be searched via The Keep's website.
http://www.thekeep.info/

The British Library Sound Archive holds a number of oral history collections of political interest including the Communist Party of Great Britain Biographical Recordings - A series of interviews with members and former members of the Communist Party of Great Britain, conducted between October 1999 and September 2001 by a group of historians based at Manchester University.
http://www.bl.uk/nsa

A copy of this book is available at the South East Film and Video Archive.