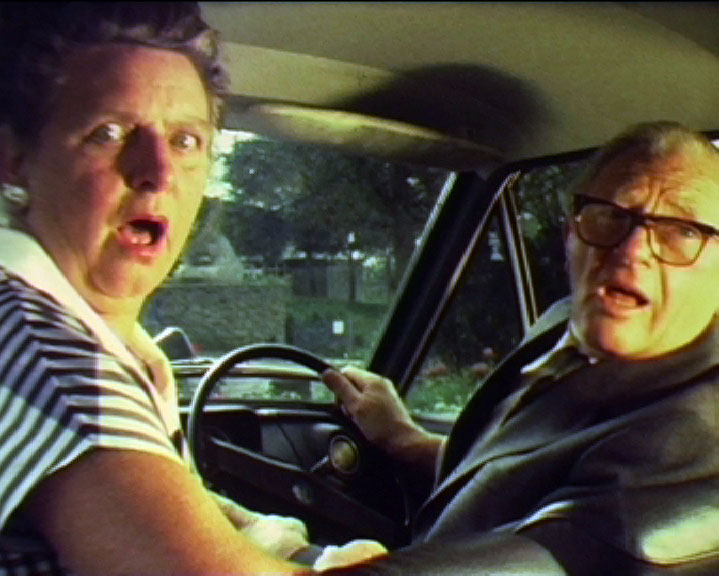 A couple arrive at a village pub, passing a bride in her wedding dress on the way in. They are guided to a table in the restaurant by a waitress. Outside, a man has seen the couple leave their car and drives away in it. A burglar, who has just robbed a bank, points a gun at the first thief and takes the car. The couple eat their soup, oblivious. A man rings a car garage after his vehicle breaks down, and two workers drive to find him. The burglar arrives on the scene just before the mechanics, who park just in front the stolen car before towing it away, assuming it is the car that has broken down. The couple tuck in to their main course, still oblivious. An old man arrives at a petrol station in his car, which looks similar to the stolen vehicle, and climbs out without putting the breaks on. The car inches forwards as the mechanics tow the stolen car into the garage. The old man climbs into the stolen car when he returns, mistaking it for his own. The couple now start to eat their desert, still enjoying their meal together. The wedding party's driver is having trouble with his car. The old man, driving the couple's stolen car, parks behind him on a road. The driver pacing the pavement, sees the car keys and drives off, leaving the old man without a car. The waitress pours the couple coffee back at the pub. The driver pulls up at the venue and rushes inside. The couple leave, smiling to the waitress, who clears their plates. They walk to their car and climb inside, turning around to see the newly married couple in the back seat. A sign reads 'Just Married' on the back of the car. Music throughout (no dialogue).