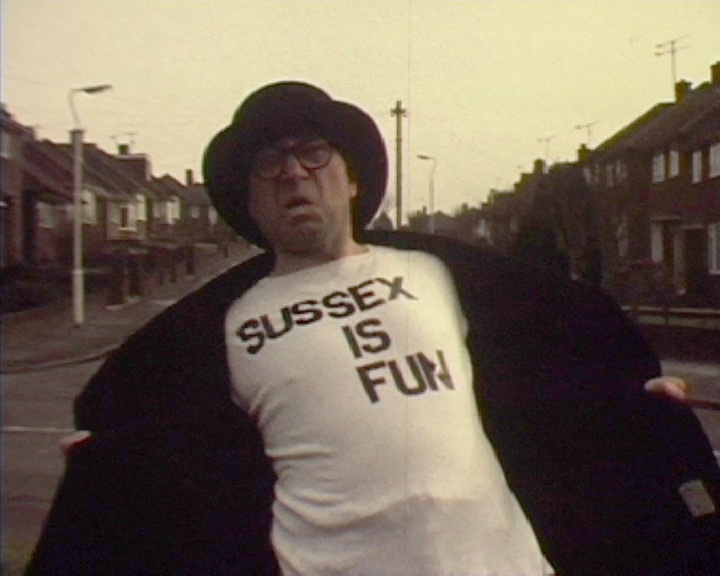 Music plays. A man rigs up a fake bus request stop, reading 'B.A.T.S.', by the side of the road. The title and credits follow. People start to gather at the request stop. Standing at the stop, a young woman is pestered by an older man. A young man, pretending to go for a run, jumps into his car but it fails to start. A woman drops her shopping as she crosses the road, spilling her oranges. Back at the bus stop, a man peels and eats a banana before throwing the skin into the road. A man walking towards the group flicks the banana skin out of his way with his umbrella before slipping on one of the oranges. As he trips, his collection of porn magazines fall out onto the road. He hurriedly places the magazines back in his case. Exhausted from running, the young man collapses on the grass by the bus stop. A man pulls up at the bus stop, letting a man, who has just approached the bus stop, into the seat next to him. As the car pulls away the number plate reads 'GAY 1'. A group of young trouble makers jump and spray beer over a parked car. Further residents queue for the bus. A man approaches, opening his overcoat to flash at the men and women standing by the road. His t-shirt reads 'Sussex is fun!' but the first three letters are hidden by his coat until he opens it wide. A bus finally arrives and the group climbs on. The man whose clever idea it was to place the request stop on the street, is left behind, waving to the driver to let him on. 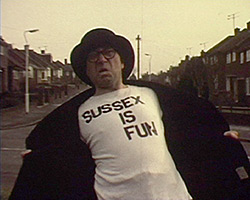