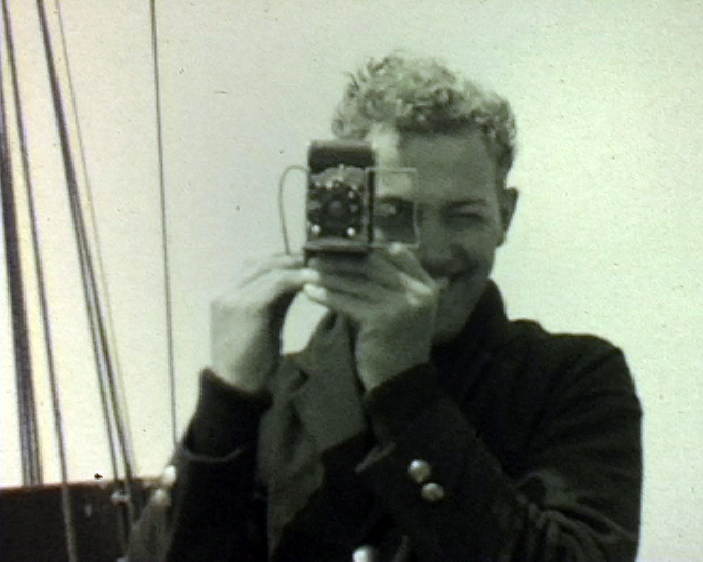 A group of men and women have a picnic by a car. A woman runs out of shot, fleeing from the camera. The group pose for the camera smiling and playing with a padded car seat, while packing up the car.

A white terrier runs around a garden. A group of men play up to the camera in the garden, attempting to saw and plane some wood.

Various sailing boats are filmed from the deck of a boat. A man climbs out from the hull followed by another. One climbs up the rigging, the other is taking pictures. Man stands on a mooring post to release the boat before casting off.

Two women and a man sit in a de-rigged sailboat, towing a dinghy. A group of Fishermen are filmed pulling up a square net to the dockside by hand as the boat approaches the harbour.

The industrial landscape is seen from the air, with the camera following the river to the countryside. Men are seen looking out of the window from inside. Barges and boats are seen on the water of a dockyard, and there are views of bridges and the urban environment, whilst flying low over a dockyard with moored barges. The sequence closes with a partly built iron bridge over a river.

Men and women, carrying cases and blankets, leave a house and get into cars on the street. They drive away. A line of men in running shorts run past several greenhouses in the grounds of the family house. The camera settles on portraits of a man smoking a pipe in a garden.

The film closes with several aerial views of the house and its grounds in the countryside, accompanied by shots of a pilot/ co-pilot in an open cockpit bi-plane style aircraft.