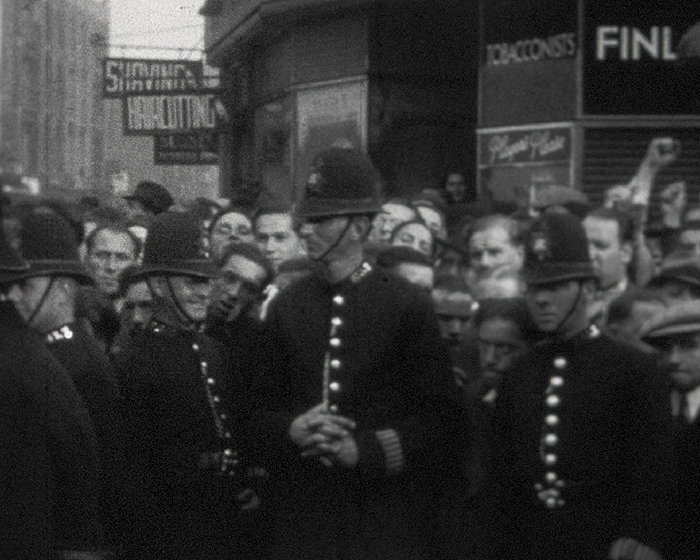 In this unique amateur film, by Lewis Rosenberg, there are large crowds of demonstrators amid a heavy police presence during the clashes known as the Battle of Cable Street. Police on horseback are seen and an ambulance passes through the crowd. A man is held under arrest and is led away.

Moving to a different event the film shows Basque refugee children with their UK sponsors at a fund raising event followed by a gathering of young communists at a summer camp in rural Kent. At the camp, a group of men play football in a garden, afternoon tea is served, and children put on a dancing display in traditional Basque costume.

There are swimming pool scenes followed by more faces of the campers. A game of tennis is played, followed by scenes of kissing and fooling about. Men use a grass roller to 'iron' clothes and a man tries to walk on the roller. The film ends with a view from a car as it drives along country road and a single shot of a wedding party.

Lewis Rosenberg was the son of Polish Jewish immigrants. His film collection consists mainly of films of friends on holidays and outings. As a socialist, however, he and his friends also captured socialist youth activities and other political events.

The Battle of Cable Street took place on Sunday 4th October 1936 in London’s East End, an area of the city that had a large Jewish population. Lewis Rosenberg’s film shows the large crowds that had gathered to prevent a provocative march through the area by Oswald Mosley’s British Union of Fascists. The government sent large numbers of police to escort the BUF along their route through Stepney and to keep anti-fascist demonstrators from disrupting the march. However, the march was abandoned after violence between the police and the demonstrators broke out resulting in more than 150 arrests.