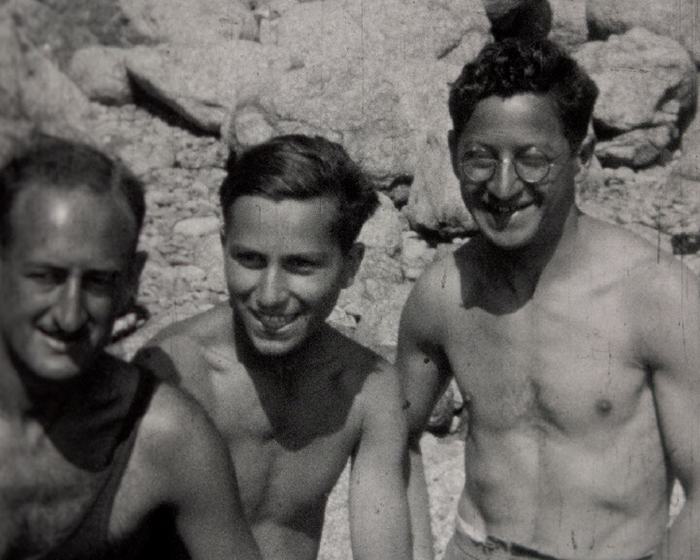 The film begins at Waterloo station showing a woman on the platform, waving off the train. On board, the group eat and take tea. There are shots of the passing countryside filmed from the train. Arriving at the quayside at Guernsey there are scenes of the steamers arriving at St Peter Port. Cars and luggage are lifted out from the ship. The group of friends then travel by road and film the landscape and coastline. A scratched film section follows.

At Guernsey airport, there are views of the airport building and from inside a small aircraft [possibly De Havilland Rapide]. There are aerial views of the landscape and cliffs, along with a brief view of the cockpit and crew.

At their camp site, the friends sit at picnic table to have breakfast. Two men sit by tent, one is in the nude. The group of friends walk along a cliff-top, carrying a wooden body board, and descent to the beach at Le Jaonnet Bay. People go bodyboarding in the surf.

The group of men push a wheel barrow laden with their bags and suitcases. They make camp and prepare their bedding. Their morning washing routine is filmed along with fetching water and washing up.

Back at the beach the men wade in sea. Finally the group of men pose for the camera, under the heading 'Tarzans'. One of the them tries on a small woollen bobble hat with a Jantzen swimwear motif.