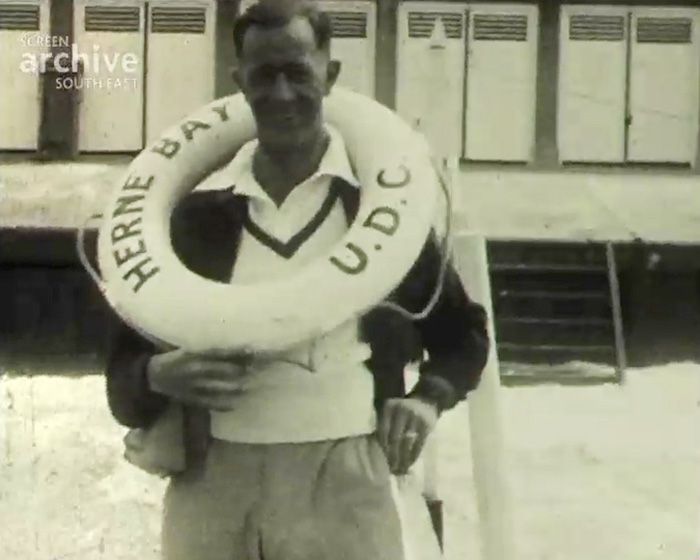 This film opens with a group tobogganing down a high slide whilst doing acrobatics, followed by mixed shots of the group Ice Skating in an indoor ice rink. A woman performs an ice dancing routine on the rink.

The next sequence shows exterior views of the Southdown bus depot in Kent, and several Southdown buses heading towards 'Folkestone', 'Ashford', 'Rye' and an East Kent bus heading towards 'Herne Bay'. The film then cuts to a shot of the platform at Herne Bay Railway station with a steam train (no. 845 ?) pulling in.

An adult group go on an outing to Margate, visiting Margate Lido where they play in the pool and Dreamland amusement park, with shots of several rides and moving views from onboard a wooden roller coaster. The sequence closes with wide exterior shots of the front of the main Modernist brick building with 'Dreamland' signage.

In Herne Bay a man takes a tour of the sea front, followed by exterior views of his boarding house signed: 'Balmoral House - Select Boarding Establishment' next to the sea front.

The next sequence shows a bus excursion to Lewes racecourse, with shots of the grounds and horses racing. A man dressed in a tribal head-dress hands a leaflet to a woman as they stand talking and laughing together(?) in the spectator area next to the track.

The final film shows a day trip to the Isle of Wight aboard the steam boat 'Glen Gowers'. Scenes of a boat mooring at Sandown Pier to collect passengers are followed by views of the construction of buildings on a second pier (?). The film ends with a journey in a lift to the esplanade, cutting to a single reverse shot of a man jumping onto the beach from a sea wall (?) and a one-legged man high-jumping over a rope jump.